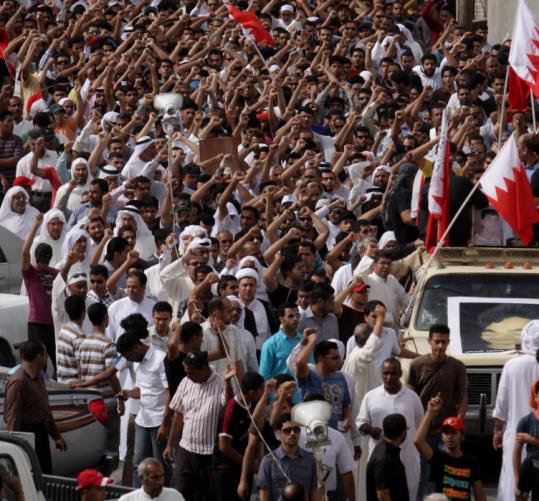 TEHRAN — President Mahmoud Ahmadinejad called on regional rival Saudi Arabia to pull its troops out of Bahrain, where they are helping a Sunni monarchy put down a Shi’ite-led protest movement demanding equal rights and a political voice.

Since the wave of Arab unrest hit Bahrain nearly two months ago it has reverberated well beyond the tiny island nation’s borders. Its sectarian element — a key difference from other Mideast uprisings — quickly pit Sunni Arab nations on their side of the Gulf against Shi’ite power Iran.

“The Saudis did an ugly thing to deploy troops . . . the Bahraini government also did an ugly work to kill its own people,’’ Ahmadinejad said at a press conference in Tehran.

A day earlier, it was the Gulf Arab nations’ turn. Their political bloc, the Gulf Cooperation Council, condemned what it said was an Iranian attempt to aggravate sectarian tension in Bahrain.

The Gulf bloc, at an emergency meeting in the Saudi capital, expressed its deep concern “over the continuing Iranian intervention in the internal matters of GCC countries by conspiring against their national security.’’

The acrimony goes back well before the outbreak of serious unrest in Bahrain, all the way to the 1979 revolution that brought Shi’ite clerical rule to Iran. Since then, Gulf Arab nations have feared Iran was seeking to stir up dissent among pockets of Shi’ites in their countries, and have watched warily as it built up its military and pushed ahead with its nuclear program.

But it is in Bahrain that the issue has been the most dramatic in recent years. The kingdom’s population is mostly Shi’ite, although it has been ruled by a Sunni dynasty for two centuries. For several years, Shi’ites have protested discrimination and a government policy to naturalize Sunnis from other nations to try to offset the demographic imbalance.

The anger periodically exploded into street clashes in which Shi’ite youths hurled stones and fire bombs at police.

Then in February, taking inspiration from uprisings in Egypt and Tunisia, Bahrain’s Shi’ite-dominated political opposition took to the streets in numbers never seen before in the country, occupying a central square. A government crackdown killed at least 27 people, and authorities say they see Iran’s influence among the opposition, though apparently no direct links.

Unable to contain the unrest immediately, Bahrain’s rulers declared a state of emergency and invited a Saudi-led regional military force to help.

Saudi Arabia has urged Bahrain’s rulers not to give ground, fearing that would embolden the Shi’ite minority clustered in its eastern oil-producing region, which lies just across a causeway from Bahrain.

Egypt
Gunmen kidnapped a grandniece of Anwar Sadat and demanded a ransom. In one southern city, robbers didn’t bother to wait until dark to target pedestrians. In another, a brawl between two schoolchildren led to a gunbattle that killed five.

In many ways, this country of more than 80 million has become a free-for-all for criminals taking advantage of a weakened police force and political uncertainty. The spike in crime has made some nostalgic for Mubarak days, when the mostly corrupt and now discredited police force used torture, intimidation, and blackmail to keep crime in check.

The uptick in crime is part of a broader climate of anxiety and uncertainty gripping Egypt in the post-Mubarak era.

The youth groups behind the uprising fear that the generals who took charge from Mubarak are reluctant to dismantle the former president’s legacy. They are frustrated over their lack of action five months ahead of a parliamentary election.

The removal of Mubarak has also allowed militant Islamist groups to operate openly, feeding tensions with the country’s Christian minority and moderate Muslims.

The persistent security vacuum in Egypt is the product of a chain of events associated with the 18-day uprising that toppled Mubarak’s regime on Feb. 11. Three days into the revolt, the police withdrew from the streets in still-unexplained circumstances following deadly clashes with protesters in Cairo and across much of the nation.

Syria
A new governor was sworn in yesterday to rule the troubled Syrian province of Daraa, center of antigovernment protests in which at least 80 people have been killed. Replacing the governor is one of the gestures by President Bashar Assad made in an effort to defuse the protests.

The Martyrs’ Day protests, as organizers called them, were the most widespread since demonstrations against the dictatorial Assad regime began March 18. The latest round of protests followed Assad’s refusal to repeal the 48-year-old emergency law that has allowed him to quash dissent.