US says worst of Japan’s nuclear crisis is receding 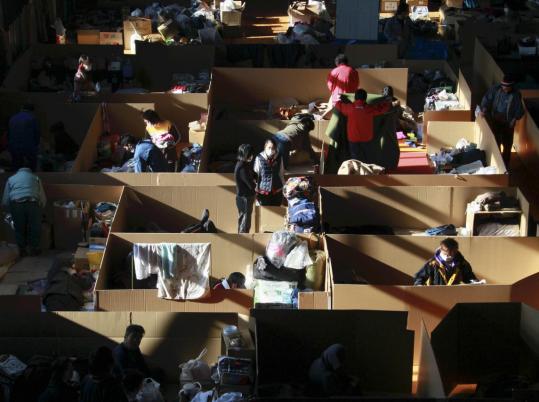 WASHINGTON — Energy Secretary Steven Chu said yesterday that roughly 70 percent of the core of one reactor at the crippled Fukushima nuclear plant in Japan had sustained severe damage.

His assessment of the damage to Reactor No. 1 was the most specific yet from a US official on how close the plant came to a full meltdown after it was hit by a severe earthquake and massive tsunami March 11.

Japanese officials have spoken of a “partial meltdown’’ at some of the stricken reactors. But they have been less than specific, especially on the question of how close No. 1 — the most badly damaged reactor — came to a full meltdown.

Chu, a Nobel laureate in physics, suggested that the worst moments of the crisis appeared to be receding, saying that the best information the United States had received from the Japanese authorities indicated that water was once again covering the cores of the stricken reactors and that pools of spent fuel atop the reactor buildings were “now under control.’’

In addition to the severe damage at Reactor No. 1, the Energy Department said that Reactor No. 2 had experienced a 33 percent meltdown. Chu cautioned that the figures were “more of a calculation’’ because radiation levels inside the plant had been too high for workers to get inside.

He called the nuclear crisis in Japan “a cascade of events’’ that led to multiple failures of backup systems. He told reporters at a breakfast that while officials were reviewing the accident to see if US nuclear plants needed significant changes, he did not want to overreact or rush into changes whose effects might not be fully understood.

Questioned about the long-term effects of Japan’s effort to “feed and bleed’’ the reactors — pouring in cooling water, then releasing it as steam into the atmosphere — he said there was an effort now underway to minimize the release of radioactivity into the air.

Meanwhile, Japan and the United States combined efforts yesterday in a final search for thousands of people still missing after the earthquake and tsunami. The three-day effort will be the last big sweep before officials in Tokyo shift focus to a daunting national reconstruction effort.

In the largest rescue mission ever carried out in Japan, 18,000 Japanese searchers have been joined by 7,000 US military personnel in an operation using 120 helicopters and reconnaissance aircraft and 65 ships to scour a coastal area from the northern tip of Iwate Prefecture to the southern end of Fukushima Prefecture.

The Japanese remain concerned by the drama at the Fukushima Daiichi Nuclear Power Station, 140 miles north of Tokyo. Since the quake and tsunami hit, the plant has sustained fires and explosions at several reactor buildings. Radiation leaks have included some into the sea near the plant.

Attempts to cool the reactors and spent-fuel pools, and efforts to answer the critical question of where the radiation leaks are coming from, are being hindered by highly radioactive water in turbine buildings attached to Reactors 1, 2, 3, and 4.

A Tokyo Electric Power spokesman said that the pumping of the contaminated water was continuing successfully.