Japan officials do not think fuel is melting 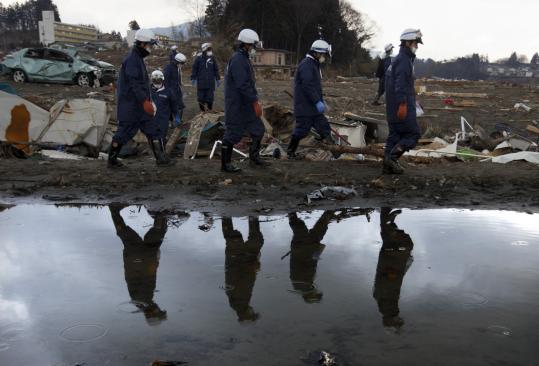 TOKYO — Sharply elevated radiation at the Fukushima Daiichi nuclear complex yesterday raised the possibility of spreading contamination and forced an emergency evacuation of part of the damaged plant.

The concerns began when a worker attempting to measure radiation levels of the water puddles there saw the reading on his dosimeter jump beyond 1 sievert per hour, the highest reading. The worker left the scene immediately, said Takeo Iwamoto, a spokesman for the Tokyo Electric Power Co., the operator of the Fukushima plant.

Michiaki Furukawa, a nuclear chemist and board member of the Citizens’ Nuclear Information Center, a Tokyo watchdog group, said exposure to 1 sievert of radiation would induce nausea and vomiting, while levels between 3 to 5 sieverts an hour could be lethal.

Such high amounts of radiation would clearly make continued recovery work near the reactor very difficult and could hobble attempts to bring the nuclear crisis under control.

Tetsuo Iguchi, a professor in the department of quantum engineering at Nagoya University, said that at the sharply elevated levels of radiation, workers would be able to remain on site for only about 15 minutes before health considerations required them to leave.

Yukio Edano, the Japanese government’s top spokesman, told an afternoon press briefing yesterday that it appeared the radioactive puddles had developed when the No. 2 unit’s fuel rods were exposed to air but that “we don’t at this time believe they are melting. We’re confident that we are able to keep them cool.’’

The higher levels may have suggested a leak from the reactor’s fuel rods — from either the suppression chamber under the rods or various piping — or even a breach in the pressure vessel that houses the rods, the Japanese nuclear regulator said earlier.

However, there was also an alarm about initial readings of radioactive iodine 134, which has a half-life of only 53 minutes and would not be present in very large quantities unless fission had resumed — that would present the alarming possibility of an out-of-control reactor. Several hours after releasing the initial results, the nuclear company said that those readings had been in error and that retesting had shown negligible amounts of the isotope.

But they confirmed the overall high radiation readings at the plant, and utility officials continued to search for the exact source. And they still may need to retest for other radioactive isotopes that would cause concerns, and confirming those results could take hours or days.

Yukiya Amano, the director general of the International Atomic Energy Agency, said authorities are still unsure about whether the reactor cores and spent fuel were covered with the water needed to cool them and end the crisis.

Hidehiko Nishiyama, deputy director general of the Japan Nuclear and Industrial Safety Agency, said that it was likely that radiation was leaking from the pipes or the suppression chamber and not directly from the pressure vessel, because water levels and pressure in the vessel were relatively stable.

Tokyo Electric said its analysis of the water in the No. 2 unit had identified radioactive isotopes of cesium, iodine, cobalt, molybdenum, technetium, barium, and lanthanum. The company has not yet been able to determine the source of the leak.

Gaseous iodine is among the first materials released when fuel rods rupture, because the iodine accumulated under pressure during the months that the fuel rods were undergoing fission. But the release of iodine does not necessarily mean the fuel rods are melting, officials said.

Each of the four damaged reactors may hold tens of thousands of gallons of radioactive water. Officials had been hoping to pump the water into huge tanks inside the reactor that are designed to hold condensed water.

But the nuclear safety agency said those tanks were found to be completely full, the Associated Press reported.

It is not easy for any liquid to travel from the reactor building to the adjacent turbine building. There are only two pipes that connect them, and they have many valves along them that should have closed automatically after the earthquake.

All yesterday, the government and company officials fielded questions from the Japanese media about whether plutonium might have escaped from one of the damaged facilities.

Edano said the area around the reactors was being tested for plutonium, but is not an easy process. He said that if the presence of plutonium was confirmed, “we will take measures depending on the situation.’’

The International Atomic Energy Agency cited information from Prime Minister Naoto Kan’s office yesterday that Tokyo Electric had begun pumping water out of some of the turbine buildings at the Fukushima plant.

Workers were pumping water from the No. 1 unit turbine to its main condenser and were making preparations to do the same at the No. 2 unit, the IAEA said, noting that a main condenser’s function in a nuclear power plant is to condense and recover steam that passes through the turbine.

The company also was considering ways to remove water from the turbine buildings of the No. 3 and No. 4 units, the agency said.

The IAEA, citing data from the Japanese authorities, reported that two of three workers who were exposed to radioactive water last Thursday suffered “significant skin contamination over their legs.’’

“The Japanese authorities have stated that during medical examinations carried out at the National Institute of Radiological Sciences in the Chiba Prefecture, the level of local exposure to the workers’ legs was estimated to be between 2 and 6 sieverts,’’ the IAEA said on its website.

“While the patients did not require medical treatment, doctors decided to keep them in the hospital and monitor their progress over coming days.’’ Edano said he understood that the injured workers would be released from the hospital today.

Meanwhile, radiation in the Tokyo water supply continued to diminish yesterday, authorities said. At two of three monitoring stations operated by the municipal waterworks bureau, there was no radiation detected. At a third, the level was 27 becquerels per kilogram, well below the maximum recommended limits for both infants and adults.

Japan’s National Police Agency said yesterday that the death toll from the quake and tsunami had risen to 10,668, with 16,574 still missing.