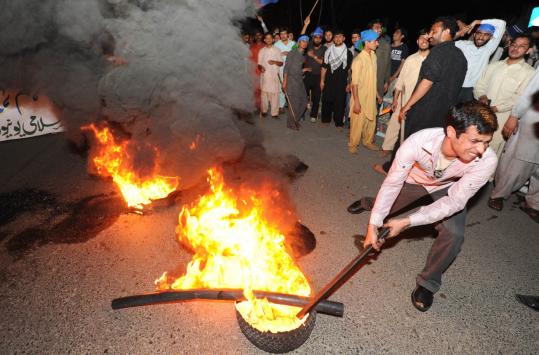 ISLAMABAD, Pakistan — A CIA security contractor who fatally shot two Pakistani men in January was released yesterday after relatives of the victims received “blood money’’ as compensation and agreed to pardon him, US officials said.

Raymond Davis was released from a Pakistani jail in Lahore after nearly two months in detention and was flown to meet with US officials in Kabul. Cameron Munter, the US ambassador to Pakistan, accompanied Davis on the flight, a US official said.

The decision to free Davis resolves what had become a high-stakes diplomatic standoff and a signal of mounting tensions between the CIA and its Pakistani counterpart, the Inter-Services Intelligence directorate, or ISI.

The case has inflamed anti-American sentiment in Pakistan, considered a key ally to the United States in its efforts to win the war in neighboring Afghanistan.

“There has been a plan in the works for the last three weeks,’’ the official said, adding that US officials had desperately worked to free Davis before a threatened murder trial began. “The concern was that if the actual murder trial started, it would become very difficult to extricate him.’’

Davis was arrested Jan. 27 after shooting two Pakistani men at a traffic signal in Lahore. Davis said that the two men were attempting to rob him and had brandished a weapon.

The US official confirmed that so-called blood money had been paid to family members of the shooting victims. In Pakistan, there is a tradition of such payments in return for pardoning the perpetrator of a crime.

An official close to the negotiations said three Pakistani families each received between $700,000 and $1 million as part of the deal to free Davis. In addition to the two men killed by Davis, a third Pakistani died after being struck by a vehicle carrying CIA personnel attempting to retrieve Davis after the shooting.

The sources for this story asked to remain anonymous because they are not authorized to discuss details of the case.

Punjab province law minister Rana Sanauallah told a Pakistani news channel that Davis was set free by the court after the blood money was accepted by the families of those killed, in accordance with Islamic Sharia law.

He said, “The members of the families of killed persons appeared before the court and independently confirmed that they have forgiven Davis.’’

The release of Davis stunned Pakistanis, and opponents immediately accused the Zardari government of bowing to US pressure and selling the nation’s sovereignty by allowing him to be pardoned for blood money. Hundreds of angry protesters tried to gather outside the US consulate in Lahore, where they were beaten back by police. Religious groups said they planned nationwide protests today.

“The judge who released Davis murdered law and justice,’’ said Senator Khurshid Ahmad of Jamaat-e-Islami, the largest religious-based political party. He said federal, provincial, and security officials had connived to free Davis, and that “blood money was taken not just for two men, but the whole country was sold.’’

Davis, 36, was a member of a security team assigned to protect CIA operatives in Lahore collecting intelligence on targets including Lashkar-e-Taiba, a militant Islamist group tied to terrorist attacks against India and long backed by the ISI.

US officials said serious negotiations to resolve the dispute began three weeks ago when Senator John F. Kerry, chairman of the Senate Foreign Relations Committee, made a surprise trip to Pakistan at the request of the administration to try to ease tensions and encourage talks.

“This was a very important and necessary step for both of our countries to be able to maintain our relationship and remain focused on progress on bedrock national interests, and I’m deeply grateful for the Pakistani government’s decision,’’ Kerry said last night.

CIA and ISI officials also met in attempts to smooth out disagreements over issues including ISI claims that the CIA was mounting secret operations inside Pakistan without informing their hosts.