No signs of life in remote villages

Further horror as thousands of bodies wash up along devastated coastline 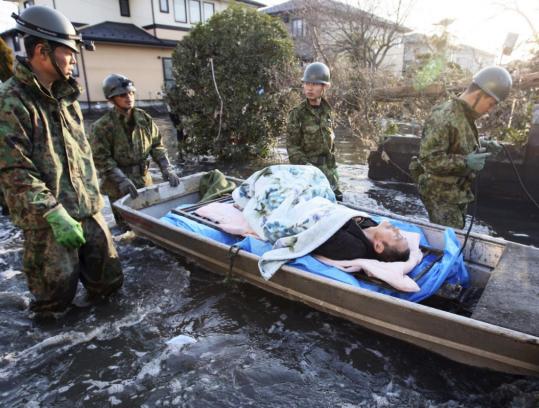 TAGAJO, Japan — Thousands of bodies washed up along Japan’s coastline yesterday, overwhelming crematoriums and adding to the spiraling humanitarian, economic, and nuclear crisis after the massive earthquake and tsunami.

Millions of people faced a fourth night without water, food, or heat in near-freezing temperatures along the northeast coast devastated by Friday’s disasters. As aftershocks and a nuclear reactor emergency continued, the stock market plunged over the likelihood of huge losses by Japanese industries.

The tsunami that barreled into northeast Japan on Friday was so ruinous that essentially no one was left to save when search-and-rescue teams finally reached several remote villages yesterday.

As bodies washed ashore, firefighters were digging others out of the debris using pickaxes and chain saws. Funeral homes and crematoriums are overwhelmed, and officials have run out of body bags and coffins.

The official death toll rose to nearly 1,900, but the discovery of thousands of bodies washed in by the sea and other reports of deaths suggest the true number is much higher.

In Miyagi Prefecture, where the police chief has estimated there were 10,000 deaths, authorities said 1,000 bodies were found scattered across the coast. The Kyodo news agency reported that 2,000 bodies washed up on two shorelines in Miyagi.

Most Japanese opt to cremate their dead. With so many bodies, the government yesterday waived a rule requiring permission from local authorities before cremation or burial, to speed up funerals, said Health Ministry official Yukio Okuda.

The town of Soma has only one crematorium, which can handle 18 bodies a day, said an official, Katsuhiko Abe. “We are overwhelmed and are asking other cites to help us deal with bodies,’’ Abe said

Hajime Sato, a government official in Iwate Prefecture, one of the hardest hit, said deliveries of supplies constituted just 10 percent of what is needed. Body bags and coffins were running so short that the government may turn to foreign funeral homes for help, he said.

The pulverized coast has been hit by hundreds of aftershocks, the latest one a 6.2 magnitude quake that was followed by a new tsunami scare yesterday.

As sirens wailed in Soma, the worst hit town in Fukushima Prefecture, soldiers abandoned their search operations and yelled to residents: “Find high ground! Get out of here!’’

The warning turned out to be a false alarm and interrupted the efforts of search parties.

Though Japanese officials have refused to speculate on the death toll, Indonesian geologist Hery Harjono, who dealt with the 2004 Asian tsunami, said it would be “a miracle really if it turns out to be less than 10,000’’ dead.

Harjono noted that many bodies in Japan may have been sucked out to sea or remain trapped beneath rubble as they did in Indonesia’s hardest-hit Aceh Province. But he also stressed that Japan’s infrastructure, high level of preparedness, and city planning to keep houses away from the shore could mitigate its human losses.

Initial estimates put rebuilding and repair costs in the tens of billions of dollars, costs that would likely add to Japan’s massive public debt, which, at 200 percent of gross domestic product, is the biggest among industrialized nations.

Barrie Cornes, an insurance analyst at Panmure Gordon & Co. in London, warned that with the tsunami bill added in, the cost to the global insurance industry could rise above $60 billion dollars, which would make it the most expensive disaster after Hurricane Katrina.

According to public broadcaster NHK, some 430,000 people are in emergency shelters or with relatives, while another 24,000 are stranded.

At a Sendai school being used as a shelter for the homeless or stranded, hundreds waited outside for water yesterday by forming a double line that followed chalk lines drawn by shelter workers.

One Fukushima City supermarket was set to open at 10 a.m. yesterday. The first customers showed up at 7. Soon, several hundred were waiting to buy rice, instant noodles, and other goods. The store manager, Hidenori Chonan, said the store didn’t have many supplies left — and electricity had already cut out.

“We don’t know when the next supply would come,’’ Chonan said.

Sendai was near the epicenter of the 8.9 magnitude earthquake. The devastation along the city’s waterfront is immense. Across an expanse of what used to be residences and factories now stretches a smoke-covered vista of crunched cars, uprooted houses, and shredded roads — all dotted with the debris of destroyed lives and businesses.

One line on the Sendai subway system is still running, but trains to Tokyo and elsewhere have all stopped. Uniformed railway staff stand in a neat line outside the now-sealed central station entrance, bowing politely to would-be passengers and explaining obliquely that “because of obstacles there is no service. Very sorry. Please forgive us.’’

Driving has been hampered by a severe shortage of gasoline. Most of Sendai’s gas stations have closed. The few that are open have hundreds of cars waiting or are restricted to serving disaster-relief vehicles.

The earthquake and tsunami heaped untold new misery on those who were already suffering: thousands of elderly, infirm, and sick people were in hospitals laid to waste by the violent shaking and the walls of water that followed.

There are no figures yet on how many hospitals were ravaged, but few could have escaped unscathed given the scale of the destruction.

In Senen General Hospital in Tagajo, some 120 patients lay in their beds or slumped in wheelchairs, moaning. “There is no food!’’ cries an old man in a blue gown, to no one in particular.

The hospital had about 200 patients when the earthquake hit, tossing its medical equipment around and collapsing part of the ceiling in one wing.

All of its food and medicine was stored on the first floor. Everything was ruined or lost in the 30 minutes when Tagajo, a small town of about 12,000, was flooded by the tsunami.

So far four patients at the hospital have died, all older than 90 and severely sick before the calamity. Another 80 were sent to a nearby shelter.

There is no power or running water, and for the first two days the staff and patients shared some frozen noodles and vegetables they salvaged from a toppled freezer.

The nurses have been cutting open soiled intravenous packs and scrubbing down muddy packs of pills with alcohol to cleanse them. A gut-wrenching stench from the bathroom, after several days of waterless use by hundreds of people, was clear from half a building away.

No aid government aid came the first two days, but some rice balls were handed out yesterday.

A relative of a worker donated a flooded generator, which two men were trying to get working outside. The local gas company set up burners outside to warm food and water.

Sam Taylor, the spokesman for Doctors Without Borders, an international group that has sent a team to Japan, said there were longer-term concerns about the elderly, many of whom are fragile and may be living on little food and water and without their lifesaving medicines.

“They have some medicines for the immediate future, but in the coming weeks that’s when it really could become an issue,’’ he said.