THIS STORY HAS BEEN FORMATTED FOR EASY PRINTING
Recovery efforts

Millions suffer without power and water as temperatures fall near freezing 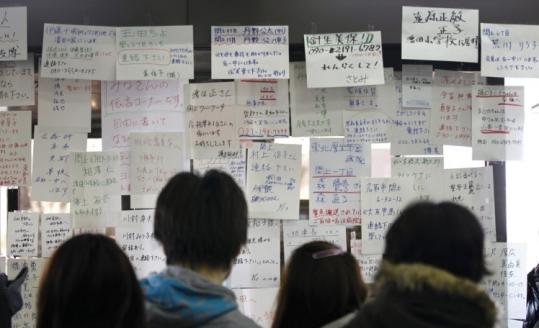 SENDAI, Japan — For Japan, one of the world’s leading economies with ultramodern infrastructure, the massive earthquake and tsunami have plunged ordinary life into nearly unimaginable deprivation.

Hundreds of thousands of people across a ravaged swath of the country suffered for a third day yesterday without water, electricity, and proper food, as the Japanese grappled with the immensity of the disaster.

Near-freezing temperatures compounded the misery of survivors along hundreds of miles of the northeastern coast battered by the tsunami that smashed inland with breathtaking fury. Rescuers pulled bodies from mud-covered jumbles of wrecked houses, shattered tree trunks, twisted cars, and tangled power lines while survivors examined the ruined remains.

In addition to food and medicine, the government sent 120,000 blankets, 120,000 bottles of water, and 29,000 gallons of gasoline to the affected areas. Officials said it would be days before electricity was fully restored.

In Rikuzentakata, a port city of over 20,000 virtually wiped out by the tsunami, Etsuko Koyama escaped the water rushing through the third floor of her home but lost her grip on her daughter’s hand and has not found her.

“I haven’t given up hope yet,’’ Koyama told public broadcaster NHK, wiping tears from her eyes. “I saved myself, but I couldn’t save my daughter.’’

A young man described what ran through his mind before he escaped in a separate rescue. “I thought to myself, ah, this is how I will die,’’ Tatsuro Ishikawa, his face bruised and cut, told NHK as he sat in striped hospital pajamas.

Still, large areas of the countryside remained surrounded by water and unreachable. Fuel stations were closed, though at some, cars waited in lines hundreds of vehicles long.

In Minamisanrikucho, where 10,000 people have not been heard from since the tsunami wiped out the town, NHK showed only few concrete structures still standing, and the bottom three floors of those buildings gutted. One of the few standing was a hospital, and a worker told NHK that hospital staff rescued about a third of the patients.

As night fell and temperatures dropped to freezing in the hard-hit port city of Sendai, people who had slept in underpasses or offices the past two nights gathered for warmth in community centers, schools, and City Hall.

Two floors of the City Hall were converted into an emergency medical clinic, and two other floors were turned into a shelter for 1,000 people. People stood in line outside to fill plastic bottles and buckets with water from a pump.

Sendai firefighters used wooden picks to dig through a flattened neighborhood. One of them yelled: “A corpse.’’ Inside a house, he had found the body of a gray-haired woman.

A few minutes later, the firefighters spotted another — that of a man in black fleece jacket and pants, crumpled at the bottom of a wooden stairwell. From outside, while the top of the house seemed almost untouched, the first floor, where the body was, had been inundated. A minivan lay embedded in one outer wall, which had been ripped away, pulverized beside a mangled bicycle.

The man’s neighbor Ayumi Osuga, 24, dug through the remains of her own house, her white mittens covered by mud.

Osuga said she had been practicing origami with her three children when the quake stuck. She gathered her children — aged 2 to 6 — and fled in her car to higher ground with her husband. They spent the night in a hilltop home belonging to her husband’s family 12 miles away.

“My family, my children. We are lucky to be alive,’’ she said.

“I have come to realize what is important in life,’’ Osuga said, nervously flicking ashes from a cigarette onto the rubble at her feet as a giant column of black smoke billowed in the distance.

In the town of Iwaki, there was no electricity, stores were closed, and residents left as food and fuel supplies dwindled.