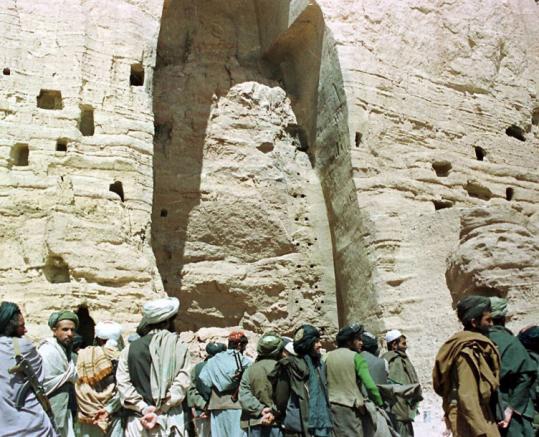 Taliban soldiers stood at the alcove one of two giant Buddha statues were destroyed in Bamiyan, Afghanistan. The Afghan government will decide whether one of them should be rebuilt. (Amir Shah/ Associated Press/ File 2001)
Associated Press / March 1, 2011

BERLIN — German scientists said yesterday that it may be possible to reconstruct one of two giant 1,500-year-old Buddha statues dynamited by the Taliban in central Afghanistan 10 years ago, which prompted a worldwide outcry and left behind only towering cliff caverns.

Researchers have studied several hundred fragments of the sandstone statues that once towered up to 180 feet high in Bamiyan Province, and found that they were once brightly colored in red, white, and blue, said Erwin Emmerling of Munich’s Technical University.

The professor of restoration and conservation science, who has visited the UNESCO World Heritage Site about 15 times since 2007, says research has shown that the smaller one of the pair — about 125 feet high — could be reconstructed with the recovered parts even though there are “political and practical obstacles’’ to overcome.

“Conservation of the fragments would require the construction of a small factory in the Bamiyan Valley — alternatively some 1,400 rocks weighing up to 2 tons each would have to be transported to Germany,’’ the university said Friday.

Emmerling is to present the findings at a UNESCO conference on the Buddha statues’ future, starting tomorrow in Paris. The Afghan government, whose representatives are also attending the meeting, will ultimately decide the statues’ fate.