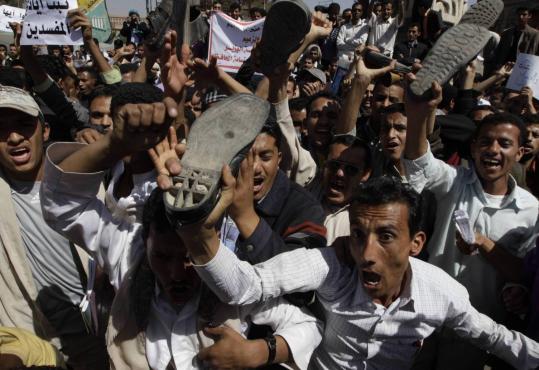 SANA, Yemen — Yemeni riot police in the capital opened fire on thousands marching in the 10th day of unrest rocking the country, killing one and injuring five others yesterday. The country’s leader blamed the unrest on “a foreign plot.’’

Protesters seeking to oust President Ali Abdullah Saleh, a key US ally in fighting Al Qaeda, began marching from the University of Sana to the Ministry of Justice, chanting: “The people want the fall of the regime.’’

They were met by police along with government supporters with clubs and knives, who engaged in a stone-throwing battle with protesters. At one point, police fired in the air to disperse the march.

A medical official said one man was shot in the neck and killed. He spoke on condition of anonymity because he was not authorized to speak to reporters.

It was the 10th straight day of protests in Yemen inspired by uprisings in Egypt and Tunisia. Demonstrators want the immediate ouster of Saleh, who has ruled for 32 years.

In a meeting with civic leaders, Saleh said Yemenis have the right to express themselves peacefully and that the perpetrators of the unrest were trying to seize power by fomenting instability. He has tried to blunt discontent by promising not to seek reelection in 2013.

Meanwhile, residents of Aden, where riots have resulted in at least four deaths, said troops in armored vehicles had deployed in the main streets and at key buildings such as the governor’s office. Many police had withdrawn from the streets, apparently to avoid confrontation with protesters.

Vice President Abd Rabou Mansour met officials in Aden and decided to seal off the city until 6 a.m. today to prevent people outside Aden from joining protests, said a security official.

Algeria Algerian police thwarted a rally by thousands of prodemocracy supporters yesterday, breaking up the crowd into isolated groups to keep them from marching.

Police brandishing clubs, but no firearms, weaved their way through the crowd in central Algiers, tackling some protesters and keeping traffic flowing through the march route.

A demonstrating lawmaker was hospitalized after suffering a head wound when he fell after police kicked and hit him, colleagues said.

The gathering, organized by the Coordination for Democratic Change in Algeria, comes a week after a similar protest.

Authorities have promised to lift a 19-year-old state of emergency that outlaws public gatherings in the capital, Algiers, by the end of February.

Police at yesterday’s demonstrations appeared to outnumber protesters in each of the groups scattered in side streets around May 1 square, a major roundabout. They stood in solid lines to block protesters from main avenues. Trucks with water cannons were parked nearby.

Still, by breaking up the crowd, the police managed to turn the planned march into a chaotic rally of small groups.

“We want a change of the regime, not a change within the regime,’’ said the doyen of Algeria’s human rights advocates, Ali Yahia Abdenour.

Tunisia The Tunisian government and a long-banned Islamic party both denounced the slaying of a Roman Catholic priest, while several hundred people gathered outside the French embassy in Tunis to demand the recall of France’s new ambassador.

The priest, Marek Marius Rybinski, was found Friday with his throat slit and stab wounds in the parking lot of a religious school in a Tunis suburb.

The slaying of the Polish priest was the first deadly attack on members of religious minorities since last month’s ouster of Tunisia’s autocratic president, Zine El Abidine Ben Ali.

The Interior Ministry said the killing appeared to be the work of a “group of extremist terrorist fascists,’’ and vowed that those responsible for the “odious crime’’ would be punished.

The long-outlawed Ennahdha, or Renaissance, party called on authorities to “cast light on the real circumstances of this incident . . . before making accusations.’’

The statement, signed by the party’s leader, Rached Ghannouchi — who returned to Tunisia last month after decades in exile — urged “vigilance in order to ward off anything that could spark anarchy.’’

Ennahdha was considered an Islamic terrorist group and outlawed under Ben Ali, but is considered moderate by scholars.

At least 2,000 people staged a peaceful demonstration in central Tunis yesterday to denounce extremism and call for tolerance.

In another protest in the capital, several hundred people gathered yesterday outside the French embassy to demand that France recall its new ambassador, Boris Boillon.

The protesters denounced what they called Boillon’s “insulting behavior’’ at a news conference last week, though it was not clear what he said to anger them.

China Chinese authorities cracked down on activists as a call circulated for people to gather in more than a dozen cities today for a “Jasmine Revolution.’’

The source of the call was not known, but authorities moved to halt its spread online. Searches for the word “jasmine’’ were blocked yesterday on China’s largest Twitter-like microblog, and the website where the request first appeared said it was hit by an attack.

Activists seemed not to know what to make of the call to protest, even as they passed it on. They said they were unaware of any known group being involved in the request for citizens to gather in 13 cities and shout “We want food, we want work, we want housing, we want fairness.’’

Some even wondered whether the call was “performance art’’ instead of a serious move.

China has limited reporting on protests in the Middle East and quickly shuts down most protests at home. Authorities appeared to be treating the protest call seriously.