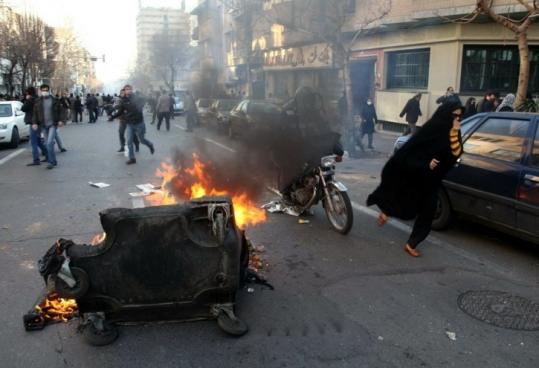 Trash bins were set on fire during yesterday’s rally in Tehran. Dozens were arrested for participating in the banned protest. (AFP/Getty Images)
By Thomas Erdbrink Washington Post / February 15, 2011

TEHRAN — Tens of thousands of demonstrators battled security forces armed with tear gas and batons during a surprisingly large antigovernment protest in the Iranian capital yesterday that drew inspiration from the uprisings in Egypt and Tunisia. At least one person was killed in the clash.

Dodging clouds of tear gas fired by police and pro-government militiamen, the protesters marched down a central boulevard and shouted slogans such as “death to the dictator,’’ “we are all together,’’ and “down with Taliban, in Cairo and Tehran.’’

Witnesses at several positions along the route said vast throngs of people could be seen marching from Enghelab (Revolution) Square toward Azadi (Freedom) Square, overwhelming police efforts to stop them.

Iranian media said one civilian was shot to death. Witnesses said at least three protesters were injured by bullets, while dozens of others were hospitalized with injuries from being beaten.

Dozens of protesters were arrested for participating in the banned rally, an opposition website reported. Similar demonstrations, clashes, and arrests were reported in the central Iranian city of Isfahan and the southern city of Shiraz.

The gathering in Tehran appeared to be the most significant antigovernment protest here since security forces cracked down on a series of massive dem onstrations in 2009. The Associated Press said tens of thousands of people demonstrated. Some witnesses said they believed the crowd exceeded 200,000.

The government seemed to have been taken by surprise by the large numbers of protesters. Security forces shot dozens of tear gas grenades at demonstrators who at times attacked members of the pro-government paramilitary Basij forces.

Police, who seemed to be mobilized in smaller numbers than usual, tried to disperse the protesters using batons and tear gas. A man was seen coming to the rescue of his wife after a helmeted officer hit her on the legs.

In the afternoon, as the crowds grew, the police were seen retreating in some areas. By evening, the protesters seemed ready to disperse. Internet service had been disrupted in Tehran, so it was difficult to ascertain the next steps for organizers, who had relied on websites and social media to launch the rally.

The roads near Tohid Square in western Tehran were lined with rocks, and steel street barriers were erected as blockades against groups of Basij members.

After sunset, trash cans were set on fire as members of Iran’s elite Revolutionary Guard Corps drove past on their signature motorcycles and shot some bystanders with tear gas and paint guns. Some people in the crowd handed out masks that offered some protection from the stinging fumes. Others lighted small fires that also provided relief.

Some demonstrators held green ribbons, the color of the opposition movement that sprang to life after President Mahmoud Ahmadinejad’s disputed election victory in 2009.

After the election, the movement staged widespread protests. Those protests were eventually stifled by security forces, including the Revolutionary Guards and the Basij militia, which are fiercely loyal to Iranian Supreme Leader Ayatollah Ali Khamenei. Two people were hanged and scores of opposition supporters jailed. The last mass demonstration was in December 2009.

The 2009 protests were led in part by presidential challenger Mir Hossein Mousavi, whose defeat by Ahmadinejad at the polls was widely questioned.

Mousavi also called for yesterday’s demonstration, saying people should rally in support of the protesters in Egypt and Tunisia who had succeeded in toppling their governments.

Although Iran’s government has praised the Egyptian and Tunisian uprisings, officials refused to grant a permit for a gathering in Iran.

The pro-government Fars News Agency, which is linked to the Revolutionary Guard, Iran’s most powerful military force, called protesters “hypocrites, monarchists, ruffians, and seditionists,’’ and ridiculed them for not chanting any slogans about Egypt as they had originally promised.

After the announcements by the opposition that they would attempt to hold a new rally in solidarity with the Egypt uprising, Iran’s security forces cut phone lines and blockaded the home of an opposition leader in attempts to stop him from attending the planned rally.

The reformist website kaleme.com said police stationed several cars in front of the home of Mousavi in advance of the demonstration. Mousavi and fellow opposition leader Mahdi Karroubi have been under house arrest since last week after they asked the government for permission to hold a rally yesterday in support of the uprisings in Egypt and Tunisia.

On Sunday, the opposition renewed its call to supporters to rally and accused the government of hypocrisy for voicing support for the Egyptian and Tunisian uprisings while refusing to allow Iranian political activists to stage a peaceful demonstration.

Ahmadinejad said the Egyptians who toppled President Hosni Mubarak took inspiration from Iran’s 1979 Islamic Revolution, which brought down a Western-backed monarchy. Iran’s opposition movement used the comments to push the government into a corner and request permission to march in support of Egypt’s protesters.

Iranian officials quickly backpedaled and said no pro-Egypt rallies were allowed — bringing sharp criticism from the White House and others.

Karroubi and Mousavi have likened the unrest in Egypt and Tunisia to their own postelection protest movement. Mousavi said Iran’s demonstrations were the starting point but that all the uprisings aimed at ending the “oppression of the rulers.’’

Hundreds of thousands of Iranians peacefully took to the streets in support of Mousavi after the June 2009 vote, saying Ahmadinejad was reelected through massive vote fraud. The opposition says more than 80 demonstrators were killed in that turmoil.