Once a backer of troop surge, he steps back 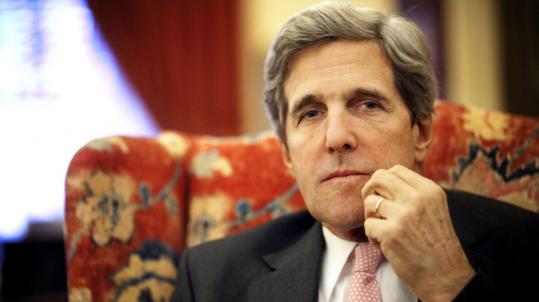 ‘What I don’t want is to be party to a policy that continues simply because it is there and in place. That would be like Vietnam. And that is what I am determined to try to prevent,' said Senator John F. Kerry. (Jay Premack for The Boston Globe)
By Bryan Bender Globe Staff / February 6, 2011

Clarification: A headline on an earlier version of this story may have left the false impression that Senator John F. Kerry has called for a significant reduction in US military forces in Afghanistan. He has not. While the senator told the Globe that troop levels should be reduced by an unspecified amount, with greater emphasis on counterterrorism, he characterized that as a "tweak" of current strategy. The story failed to mention Kerry's description of his position as a "tweak." A Kerry spokesman also disputed the story's portrayal of his meeting with Boston University professor Andrew J. Bacevich, a war opponent, as evidence of the senator's growing doubts about the war. The spokesman said Kerry regularly speaks with people of varying views on the war and that the Bacevich meeting had no larger meaning.

For more than an hour, in a booth at Eastern Standard, a restaurant in Kenmore Square, Bacevich told the chairman of the Senate Foreign Relations Committee why he believes the decade-long conflict is turning into another Vietnam.

Kerry, a Vietnam War veteran who opposed that conflict, strongly disputed that conclusion. But his lunch with the BU international relations professor was evidence of Kerry’s deepening doubts about the war’s course and his own search for new approaches.

Once a key supporter of President Obama’s surge of troops in Afghanistan, Kerry said he has concluded that the US strategy in Afghanistan has to be revised. He is calling for a more limited focus and fewer American troops than the 155,000 that are in place now.

“What I don’t want is to be party to a policy that continues simply because it is there and in place,’’ Kerry said in an interview about his evolving views of the war in Afghanistan. “That would be like Vietnam. And that is what I am determined to try to prevent.’’

In the coming weeks, Kerry said he will hold a series of oversight hearings to delve into how the Obama administration expects military gains in recent months to be sustained over the long term by a viable Afghan government.

“Obviously, I think progress has been made in military terms, but everybody agrees there is not a military solution,’’ Kerry said. “What I worry about is whether or not the governance [improves] sufficiently to make a difference.’’

Kerry aides say the lineup of upcoming hearings is still taking shape, but there are plans to air a wide array of viewpoints, not just those of top commanders like General David Petraeus, Secretary of State Hillary Rodham Clinton, and other diplomats and government officials.

Fellow members of the Senate panel say Congress must soon decide whether a large-scale US military operation should be sustained for at least three more years, as the Obama administration plans.

Senator Robert P. Casey, Jr., a Pennsylvania Democrat, wants to know how and when the Afghan army and police forces will be ready to take over from the US and NATO forces in the country.

Since the US-led invasion to topple the Taliban in 2001, US troop deaths have reached nearly 1,500, with thousands more wounded. The cost of the conflict has exceeded $400 billion. Polls now show that the American public is growing increasingly wary, with at least half saying they believe the United States should withdraw.

Senator Richard Lugar of Indiana, the ranking Republican on the panel, told the Globe he thinks a looming question is whether the United States is willing to accept powerful regional warlords if the central government cannot fill the void.

For Senator Jeanne Shaheen, a New Hampshire Democrat, the big question is “whether this war is worth the cost.’’

“I think we also have to look carefully at how much further we are going to give the president’s strategy and the troops time to work,’’ she said.

Kerry says he is looking at all these issues through the lens of his own experience during another protracted war more than a generation ago.

That experience is displayed on the walls of his Senate office. There is a picture of a shaggy-haired Kerry in a drab-green uniform gesturing before an antiwar rally, and a shot of his April 18, 1971 appearance on NBC’s “Meet the Press.’’ It was four days later that Kerry testified before the committee he now chairs, famously asking, “How do you ask a man to be the last man to die for a mistake?’’

War critics now want Kerry to use the committee, as then-chairman Senator William Fulbright did during Vietnam, to criticize this war, but Kerry insists that Afghanistan and Vietnam are very different conflicts. In his view the United States now has real interests at stake, particularly in neighboring Pakistan, a nuclear-armed nation where the leaders of Al Qaeda who perpetrated the Sept. 11, 2001, attacks are believed to be planning more attacks.

“Some people try to make it [Vietnam] and some people want it to be the same exercise,’’ Kerry said. “But it just isn’t. Unlike Vietnam, where there was no threat to the United States, and no real strategic interest — it was trumped up — here there is a real one.’’

Yet he acknowledges he cannot escape the lessons of Vietnam and what compelled him to call for a withdrawal of US military forces from Southeast Asia.

“Some of the biggest lessons are those that I am trying to apply,’’ Kerry said. “Don’t take things for granted. Don’t take things at face value. Don’t believe everything somebody tells you because they are in a position’’ of authority. “Probe it. Look at it. Test it. Look for the truth. It took us too long to get to the truth in that war.’’

To many others who are also struggling with the US policy in Afghanistan, it is Kerry’s Vietnam biography that they believe gives him a unique ability — and responsibility — to ask the tough questions and demand answers now.

“While he is supportive of the administration, Kerry has become the conscience,’’ said Stephen Clemons, director of the American Strategy Program at the New America Foundation, a Washington think tank.

Shaheen said Kerry’s Vietnam experience “gives him a breadth of experience that is important as we make decisions about what we are doing.

“He has been on the other side,’’ she said. “He has some understanding of what our men and women serving there are experiencing.’’

But Bacevich, Kerry’s recent luncheon companion, says he left their recent meeting unconvinced that all the right questions are being asked. He said Kerry highlighted the military gains that have been achieved in recent months to justify his continued support, including claims that most of the top Al Qaeda leaders have been taken out.

“Even if you could pacify Afghanistan that would not substantially reduce the jihadist movement,’’ Bacevich said.

Bacevich said the claims of military progress reminded him of similar arguments in Vietnam.

“Supporters frequently cited signs of tactical progress to refute critics of the war — that there was a light at the end of the tunnel and sooner or later the other side would fold.’’

For Kerry, the parallels to Vietnam are likely to increase as the war drags on.

He recently spoke with a young soldier who lost his leg in a roadside bomb attack in Afghanistan.

“He says ‘you know, sometimes the [intelligence] that we provide at the lower level gets kind of blown up and distorted by the time it gets up top and things aren’t quite the way we have seen them,’ ’’ Kerry recalled the soldier telling him. “I remember that stuff’’ from Vietnam. “That is the kind of thing we have to dig at here and make sure that there’s a reality check in all of this.’’

And he insisted he is willing to take a politically unpopular stand if he determines reality requires it, even it means bucking a president from his own party.

“I don’t work for the administration,’’ Kerry said. “I work for the people of Massachusetts and I have a responsibility to myself and my conscience to get this right. I am determined to call it the way the truth tells me it ought to be called.’’