Kinder prison, swifter justice for US detainees in Afghanistan 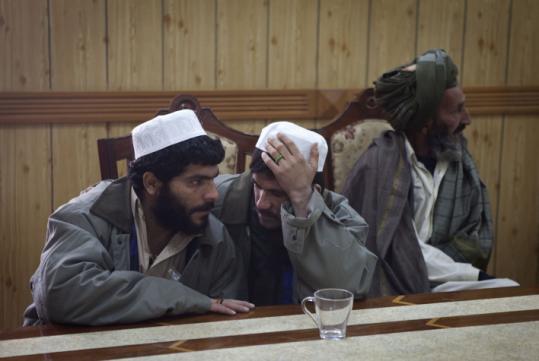 Khan Mohammed (left), who was linked to a rocket attack, sat with another detainee and a tribal elder before his release. (Jason P. Howe for The Boston Globe)
By Farah Stockman Globe Staff / January 18, 2011

KANDAHAR, Afghanistan — A few months after insurgents launched a rocket attack on Kandahar’s air base, US soldiers kicked down Khan Mohammed’s door and whisked the stout, ruddy-faced 27-year-old — blindfolded and handcuffed — to an American prison near Kabul.

Since the Sept. 11 terrorist attacks, US forces have detained thousands of suspected enemy combatants without trial in facilities such as Guantanamo Bay in Cuba, Abu Ghraib in Iraq, and Bagram in Afghanistan. US officials say the detentions prevent attacks, but critics charge that innocent people have been unfairly held for years.

Mohammed’s story illustrates what US officials say is a dramatic shift in policy aimed at treating suspected enemies better, and releasing them sooner.

“We changed everything,’’ said Vice Admiral Robert Harward, head of US detention operations in Afghanistan, who oversees a new, modern prison outside the boundaries of the Bagram Air Base, near Kabul, which officials say emphasizes rehabilitation and release.

Mohammed was taken to the new prison and was brought be fore a military judicial panel within weeks. But his case also reveals how, despite these improvements, the military’s opaque judicial process often seems arbitrary to the local populace and continues to leave some Afghans unappeased.

Sensitive evidence against Mohammed was never shared with him, nor explained to the public. Four months after he was seized, American soldiers issued him a gray coat, a white prayer cap, and a black bag containing a toothbrush, then set him free with little explanation.

His quick release bolstered the belief among some Afghans that he should never have been arrested. Some also say an evolving system of judicial trials for detainees is unfair.

“The perception is still that it is like a black hole,’’ said Hekmat Karzai, a cousin of Afghan President Hamid Karzai and director of the Centre for Conflict and Peace Studies, an independent, nongovernmental organization in Kabul that offers legal defense to detainees.

Numbers released by American authorities tell a tale of speedier justice, however. In 2010, as US troops pushed deep into hostile territory, the US-led coalition arrested 6,223 Afghans, the largest number on record, Harward said. But about 5,000 were let go within days, often after tribal elders vowed to keep them out of trouble.

About 1,200 — who had the most damning evidence against them — were sent to the new $60 million US prison facility outside Bagram Air Base. A quarter of them were released within months without a trial.

“There are people who think this is all rearranging the deck chairs on the Titanic. But you have got to hope they succeed,’’ said Eugene Fidell, a professor at Yale Law School and a specialist in the subject of military justice.

Mohammed’s case shows the challenge. US and Afghan forces began looking for him after the May 2010 nighttime rocket assault on Kandahar Air Base that injured several soldiers. Afghan intelligence agents arrested a dozen suspects, some of whom pointed the finger at Mohammed. When they arrested him in September, his cellphone was found to contain the telephone numbers of insurgents, according to a senior official with Task Force 435, which is in charge of US detention operations in Afghanistan.

The timing of Mohammed’s arrest — and the fact that he was taken by US soldiers — worked to his advantage.

Had Mohammed been arrested by Afghan security forces, he might have been sent to an Afghan court, and sentenced to serve in an Afghan prison. At Pul-e-Charkhi, a prison outside Kabul that houses some 5,000 inmates, including about 1,400 suspected suicide bombers, Taliban fighters, and other “national security’’ threats, prison officials have no authority to release detainees, as the Americans do.

“It’s not fair,’’ said Akhtar Mohammed, 47, who was sentenced to 10 years for being in the Taliban. As he cooked turnips on the floor of his dorm-like cell in the Afghan prison, he produced a letter from tribal elders from his breast pocket, attesting to his good character. But the only way he will be able to get out sooner, he said, is if he can come up with a hefty bribe.

If Khan Mohammed had been arrested by US forces a year earlier, he would have been sent to a makeshift US jail at Bagram Air Base, where two detainees died in 2002 at the hands of interrogators who later pleaded guilty to assault charges.

But last year, in an attempt to improve the US image, General Stanley McChrystal, then-commander of forces in Afghanistan, recommended that a model prison be built.

Constructed just outside the walls of the base, the new facility boasts literacy classes in English and in the detainees’ native language, a greenhouse where inmates grow spinach and cabbage and learn beekeeping and irrigation farming techniques; and a traditional clay oven in the prison yard where they can learn to bake bread. The facility even has a program in which about 20 inmates discuss geopolitics and Afghan history with a professor.

Not everyone is eligible for the rehabilitation programs or speedy release; 119 inmates have been detained for more than two years, about 80 of whom Harward said the United States intends to keep indefinitely because they are third-country nationals or Al Qaeda affiliates deemed a serious security threat outside Afghanistan.

But for those that the US considers relatively low-level fighters, like Mohammed, US detention can be short. US soldiers gave Mohammed a psychiatric assessment and a health exam, and scanned his iris so that he could be biometrically identified. They issued him a uniform emblazoned with his detention number — 4449 — printed in huge numerals across the front, a mat and a blanket, and locked him in a large yellow metal cage, where about two dozen inmates slept on the floor.

Mohammed received three meals a day, prepared by US soldiers using Afghan recipes they found on the Internet. If Mohammed felt ill, he was brought to an outpatient clinic staffed by eight doctors, an optometrist, an orthopedic therapist, and a dentist.

Two months after he arrived, he was called before a review board of three US military officers. He was not allowed to see the classified evidence against him, but a military officer assigned to represent him was given access on his behalf, similar to review hearings at Guantanamo Bay. The board determined that he was not a serious threat and ordered his release. (A Globe request to see a transcript of his hearing was denied, but US authorities broadly described the cellphone number and informant evidence against him.)

He became one of more than 300 detainees freed by the review boards. Meanwhile, nearly 300 others were referred for trial by Afghan courts, including a special onsite court where Afghan judges, prosecutors, and forensic experts are mentored by Americans.

Thirty-six such trials been held here since June and all but two ended in convictions. US officials hope these trials will largely replace the review board hearings next year. So far, 17 detainees who have left the facility have been rearrested, Harward said, and at least one has been killed by the Taliban.

Mohammed spent four months in US custody. On Dec. 26, he and eight others were put on an airplane back to Kandahar and driven in a convoy of armored vehicles to the governor’s compound, where tribal elders awaited them.

US officials said the elders were there to guarantee the detainees would not return to the fight. Instead, tribal elders complained bitterly about the arrests. One stood and said: “We cannot tolerate coalition forces to come to our compound, search our females, and do illegal activities.’’

Throughout the ceremony, Mohammed sat in the front of the room, before a giant portrait of President Karzai.

In a brief interview, Mohammed told an American reporter that he had no complaints about his detention.

“Everything was good,’’ he said, through a translator, adding that they were well fed and allowed the practice their religion.

But when he was given a microphone to address the crowd, which included Harward, he told them: “The humanity of the coalition is not humanity. They are crueler than cruel.’’

Afterwards, Mohammed drifted away with his uncle, talking breathlessly into a cellphone. A few days later, when a reporter tried to contact him, the leader of his district explained that he is from a nomadic clan, and was nowhere to be found.

© Copyright 2011 Globe Newspaper Company.
Chronology on war detainees
January 2002 — Some detainees arrested in the war in Afghanistan are sent to Guantanamo Bay.

December 2002 — Two inmates at Bagram prison in Afghanistan are beaten to death by US soldiers.

April 2004 — Scandal breaks over sexual abuse and inhumane treatment of detainees at Abu Ghraib in Iraq.

January 2009 — President Obama orders Guantanamo Bay closed within one year but has faced hurdles from Congress in transferring detainees from the facility.

December 2009 — Detainees from a prison at Bagram in Afghanistan are transferred to a new detention center aimed at rehabilitation.

January 2010 — US forces sign an agreement with the Afghan government that the new facility will be eventually transferred to Afghan control.

July 2010 — US military turns over the last US prison in Iraq to the Iraqi government; the United States retains control over about 200 prisoners. — SOURCE: Media reports