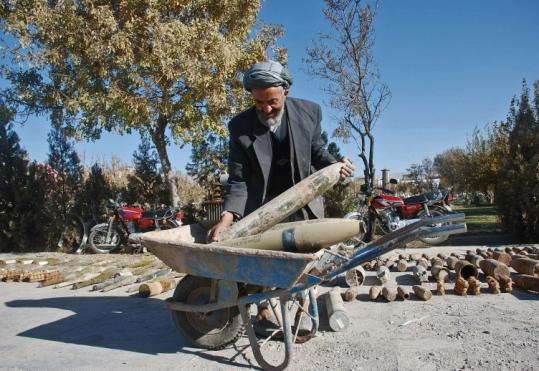 KABUL, Afghanistan — An Afghan border police officer killed six American servicemen during a training mission yesterday, underscoring one of the risks in a US-led program to educate enough recruits to turn over the lead for security to Afghan forces by 2014.

The shooting in a remote area near the Pakistani border appeared to be the deadliest attack of its kind in at least two years.

Attacks on NATO troops by Afghan police or soldiers, although still rare, have increased as the coalition has accelerated the program. Other problems with the rapidly growing security forces include drug use, widespread illiteracy, and high rates of attrition.

A spokesman for the Afghan Interior Ministry, Zemeri Bashary, confirmed that the gunman in yesterday’s attack was a border police officer rather than an insurgent who donned the uniform for a day.

“Today he found this opportunity and he killed six invaders,’’ said Zabiullah Mujahid, a Taliban spokesman, in a statement e-mailed to the media.

The shooter opened fire on the NATO troops and then was killed in the shootout, NATO said, without providing additional details.

Colonel Dave Lapan, a Pentagon spokesman, confirmed that the six killed were American. He declined to provide their identities or say which military branch they were from until next of kin could be notified.

Bashary said the attack happened in the Pachir Wagam district of Nangarhar Province, a volatile area near Pakistan.

An investigation team has been sent to Pachir Wagam, said General Aminullah Amerkhail, the regional border police commander for the east. But he said information was not coming back quickly.

“The area is very remote,’’ he said. “Even the telephones are not working there.’’

NATO is still investigating a case earlier this month in which two US Marines were killed in southern Helmand Province, allegedly at the hands of an Afghan soldier.

After two deadly shootings in July, NATO officers said they were reexamining training practices to make sure that such attacks did not happen again.

On July 20, an Afghan army sergeant got into an argument at a shooting range in northern Afghanistan and shot dead two American civilian trainers before being killed. Another Afghan soldier was killed in the crossfire.

A week earlier, an Afghan soldier stationed in the south killed three British troopers, including the company commander, with gunfire and a rocket-propelled grenade in the middle of the night.

In November 2009, an Afghan police officer killed five British soldiers at a checkpoint in Helmand.

On Sept. 29, 2008, an Afghan police officer opened fire at a police station in eastern Paktia Province, killing a US soldier and wounding three before he was fatally shot. A NATO official expressed shock at the time that an Afghan officer would betray his NATO partners.

The recent increase in such shootings suggests that the Afghan security forces may be suffering from growing pains. In the past year, the size of the Afghan police force grew 27 percent, from about 95,000 officers to 120,500. The army increased 42 percent, from 97,000 soldiers to about 138,200.

There have also been problems with retention, and even those who stay are often lacking the most basic skills.

Only 11 percent of enlisted personnel and 35 percent of noncommissioned officers in Afghanistan’s army and police are literate, according to NATO trainers. And before NATO took over the training mission for the security forces, many Afghan police recruits were issued uniforms and guns and sent out to postings without any sort of training in weapons or law enforcement.