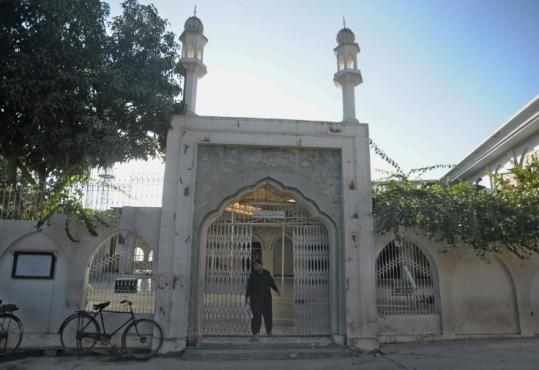 A Pakistani man exited a mosque in Islamabad that was targeted by a would-be suicide bomber yesterday. (Farooq Naeema/AFP/Getty Images)
By Asif Shahzad Associated Press / November 27, 2010

Al Qaeda and Taliban militants seeking to topple Pakistan’s US-allied government have carried out scores of attacks across the country, killing thousands. The military has responded by launching offensives in the remote northwest where the insurgents are based, and the United States has increased its barrage of missile attacks on those strongholds out of reach of the Pakistani Army.

Police officer Bin Yamin said the detained men were linked to the Pakistani Taliban in the South Waziristan region, where the army has been fighting the militants since last year.

One of the men was arrested wearing an explosives vest and was on his way to attack an Islamabad mosque during Friday prayers when officers seized him, Yamin said. He did not say why the militants would target the mosque.

Most attacks have been on government, security, or Western targets, though there have been seemingly indiscriminate blasts in public places, presumably to spread terror and undermine confidence in the government.

Questioning of the suspects indicated that the plotters were also planning to hit government buildings, Yamin added.

Interior Minister Rehman Malik said authorities learned about a possible suicide bombing at Parliament or nearby buildings Thursday night and quickly increased security in the area.

“We took all the required measures without creating a panic,’’ Malik told the state-run Pakistan Television.

The last major terrorist attack in Pakistan’s capital was in October of last year, when a suicide bomber killed five UN staffers at the World Food Program’s office.