Three others killed in attack on 2d mosque 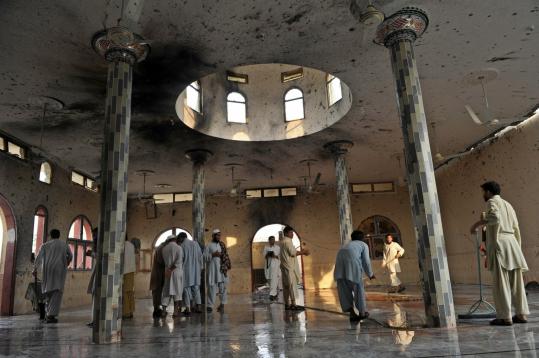 Pakistani villagers cleaned the interior of a mosque in Darra Adam Khel following a suicide bombing that killed at least 67 people during the main weekly prayers. The mosque is in an area favored by anti-Taliban militias. (A Majeed/AFP/Getty Images)
By Riaz Khan Associated Press / November 6, 2010

PESHAWAR, Pakistan — A suicide bomber struck a mosque frequented by anti-Taliban tribal elders in northwestern Pakistan during afternoon prayers yesterday, killing at least 67 people in one of the deadliest attacks this year.

Later in the day, three grenade blasts killed three people at a mosque in another northwest area where an anti-Taliban militia was active.

The bombings were the latest in a series of blasts to hit religious gatherings and underscored the relentless security challenge in the US-allied nation, where Islamist militants have managed to strike at the state and citizens who work against them despite pressure from army offensives.

In the first attack, the Sunni mosque’s roof collapsed as hundreds of worshippers were gathered inside for the most popular prayer session of the week, and many victims were trapped in the debris.

People in private vehicles rushed the wounded to hospitals in Peshawar, the main city in the northwest, television video footage showed. A woman was seen beating her head, while two elderly men in blood-soaked clothes rested in a hospital corridor.

The explosion occurred in Darra Adam Khel, an area famous for its illegal weapons bazaars and located near Pakistan’s tribal regions where Taliban-led militants have been active.

“The blast tossed me up, then I fell down,’’ Mohammad Usman, 32, a schoolteacher with wounds on his head and arms said from his hospital bed in Peshawar. “Later, it was just like a graveyard.’’

Local government official Shahid Ullah said the mosque may have been targeted because local tribesmen running an anti-Taliban militia have often met there, though not on this particular Friday. The Pakistani government has encouraged tribal leaders to set up militias to fight the insurgents, and the Taliban have frequently targeted those opponents.

GEO News TV reported that the Pakistani Taliban claimed responsibility for the attack, but the group’s spokesmen did not immediately respond to calls from the Associated Press seeking comment.

Another local government official, Saeed Khan, put the death toll at 67 and said 100 others were wounded. That made the attack the deadliest since a pair of suicide bombers killed 102 people and wounded 168 in the Mohmand tribal region in July.

Last night, three hand grenades exploded during evening prayers at a Sunni mosque in the Badhber area on the outskirts of Peshawar. Along with three dead, the blast wounded 24 others, said police official Ejaz Khan.

Mian Iftikhar Hussain, the northwest province’s information minister, said an anti-Taliban citizens’ militia had been pushing insurgents out of the area and that the attack may have been a reaction to that. Pakistani TV channels showed bloodied victims being rushed to the hospital.

Several shrines and mosques belonging to rival sects hated by the Taliban have been targeted in Pakistan this year. At least three such attacks occurred in October alone.

Hussain called the militants “beasts’’ that are lashing out at Pakistan’s crackdown against them.

“This is part of international terrorism. America, Pakistan, and Afghanistan are the main players, who need to work closely and more aggressively to root out this menace,’’ said Hussain, whose only son was killed by militants earlier this year.

Pakistan is in the midst of multiple offensives against Taliban and linked militants in its northwest, including the tribal areas that border Afghanistan.

The US has praised the offensives, in hopes they will break the backs of at least some of the groups involved in attacks on American and NATO troops in neighboring Afghanistan. However, Pakistan has yet to mount an operation in North Waziristan, the tribal region where the most dangerous groups working against the United States in Afghanistan have bases.

The United States needs Pakistan’s support for the war in Afghanistan in part because it uses its roads to transport supplies to troops across the border. Those supply trucks, however, have become targets of suspected militants and criminal groups.

The explosions struck an area where the trucks were waiting for their turn to go through to Afghanistan. Authorities were still investigating the nature of the blasts, Khan said.

In Pakistan’s southwest, two men on a motorcycle opened fire at a NATO supply truck in Sohrab town, killing its driver and wounding two others, police official Mohammad Younus said. The truck was on its way back to Karachi after offloading NATO supplies in Afghanistan.