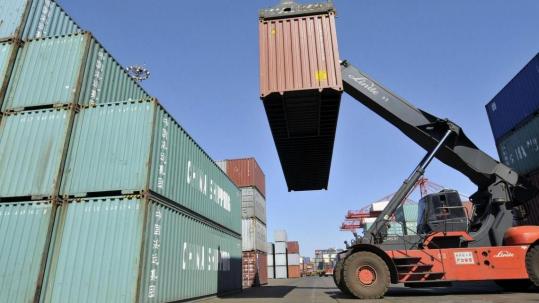 A container is unloaded at China’s Rizhao Port. China is signaling ire over US claims of unfair trade practices by Beijing, calling the charges a bid to win domestic political favor. (Reuters)
By Michael Wines and Xiyun Yang New York Times / October 18, 2010

BEIJING — A dispute between China and the United States over Beijing’s subsidies to clean-energy industries escalated yesterday when a senior Chinese economic official warned that Washington “cannot win this trade fight.’’

In an abruptly scheduled news briefing here, the official, Zhang Guobao, sharply rebuked the Obama administration for opening an inquiry on Friday into the subsidies.

“I have been thinking: What do the Americans want?’’ said Zhang, vice chairman of the government’s National Development and Reform Commission. “Do they want fair trade? Or an earnest dialogue? Or transparent information? I don’t think they want any of this. I think more likely the Americans just want votes.’’

With campaigning for the November midterm elections defined in large part by bleak economic and employment statistics, candidates in both parties have increasingly blamed Chinese trade policies for slowing the US recovery from the 2008 economic collapse.

Zhang’s comments signaled that tensions were rising not only over trade issues but also over longstanding claims the Chinese have artificially depressed the value of their currency.

He is widely seen in the West as China’s top policy maker on energy because he heads the National Energy Administration.

It is highly unusual for an official of Zhang’s standing to convene a news conference on short notice and denounce the US government in such blunt terms.

Should the United States appeal to the World Trade Organization, Zhang said, “the only ones who will be humiliated are themselves.’’

He was reacting to the announcement the US Trade Representative’s office would investigate Chinese government support for manufacturers of wind turbines, solar energy products, energy-efficient vehicles, and technologically advanced batteries.

“The United States is committed to the international trade rules in the WTO and our other trade agreements,’’ Nefeterius Akeli McPherson, a spokeswoman for the trade representative, said yesterday.

They also accuse China of depressing its currency so exports will sell cheaply abroad, while imports of foreign products will be more expensive.