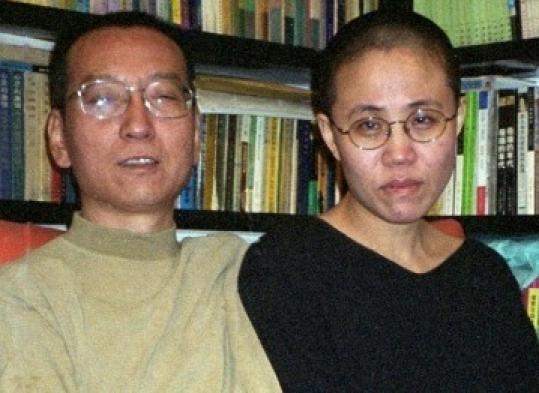 BEIJING — The wife of this year’s Nobel Peace Prize recipient, Liu Xiaobo, was allowed to meet with her husband yesterday at the prison in China where he is serving an 11-year sentence, but then she was escorted back to Beijing and placed under house arrest, a rights group said.

Prison officials had informed Liu that he won the award — a decision the Chinese government vehemently condemned — the day before. In their hourlong visit, Liu’s wife, Liu Xia, said her husband had told her, “This is for the lost souls of June 4th,’’ and was moved to tears.

Hundreds died June 4, 1989, when Chinese troops and tanks crushed prodemocracy demonstrations in Beijing’s Tiananmen Square. Liu Xiaobo told his wife that the award commemorates the nonviolent spirit in which those who died fought for peace, freedom, and democracy, the group, Human Rights in China, said in a statement.

In Beijing, Xia Liu’s phone and Internet communications have been cut off, state officers are not allowing her to contact friends or the media, and she can leave her house only in a police car, the statement said.

Liu Xiaobo, who was active in the 1989 movement, spent the next two decades pressing for political change in China. A 54-year-old former literature professor, he was one of the main authors of Charter ’08, a prodemocracy manifesto.

Based on his prodemocracy writings, Liu Xiaobo was convicted in December of “inciting subversion of the state.’’