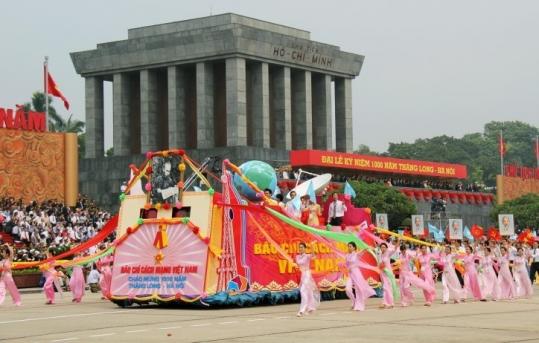 HANOI — Draped in red Communist banners and propaganda slogans, Vietnam’s capital turned 1,000 years old yesterday in an extravagant ceremony intended to stoke national pride and show the world that this once war-ravaged country has moved beyond its dark history.

The procession, a third of which was military, started in the capital’s historic Ba Dinh Square, where then-President Ho Chi Minh declared independence from the French colonialists 65 years ago. Ho’s massive granite mausoleum provided the backdrop for the festivities commemorating King Ly Thai To’s decision in 1010 to move Vietnam’s capital 62 miles north to Hanoi, then called Thang Long.

Defense ministers from Asian and other nations began arriving in the capital yesterday for a regional security meeting that follows a number of sea disputes involving China.

US Defense Secretary Robert M. Gates is attending the two-day meeting of the Association of Southeast Asian Nations.