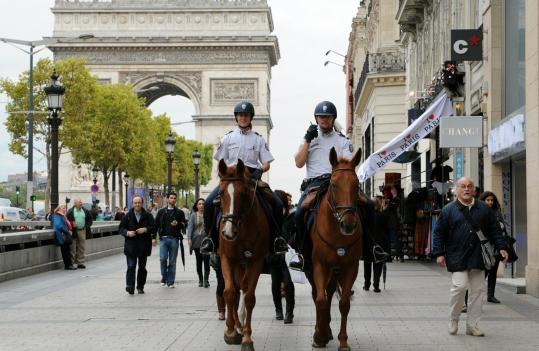 BERLIN — An American missile strike killed five German militants yesterday in the rugged Pakistan border area where a cell of Germans and Britons at the heart of the US terror alert for Europe — a plot US officials link to Al Qaeda leader Osama bin Laden — were believed in hiding.

The attack, part of a recent increase in American drone strikes on Pakistan, occurred as Germany said it has “concrete evidence’’ that at least 70 Germans have undergone paramilitary training in Pakistan and Afghanistan and that about a third have returned to Germany.

Authorities across Europe have heightened security at airports and other travel hubs as well as at main tourist attractions after the US warning of an Al Qaeda-linked terror plot targeting London, Paris, Berlin, and other European capitals.

Washington advised Americans over the weekend to use caution when traveling in Europe and imposed a curfew on some US troops based in Germany.

Britain, Japan, and Sweden issued warnings of their own yesterday, advising their citizens traveling in Europe to be on alert for a possible terrorist attack.

Police officers with search dogs patrolled subways in Britain, while soldiers and mounted police were dispatched to two major churches in Paris — Notre Dame in the heart of the city and Sacre Coeur on the Right Bank. Paramilitary troops were also seen patrolling the area around the Eiffel Tower, twice evacuated in recent weeks for unspecified threats.

American officials advised travelers to be watchful for suspicious activity, such as unattended packages, and to plan how they would exit buildings and move away quickly from any threatening situations.

Michael Chertoff, the former Homeland Security secretary, said yesterday that tourists should consider “where would you take shelter if something happened.’’ And he also advised, “Don’t walk around with the American flag on your back.’’

The US missile strike in Pakistan killed five German militants taking shelter in a house in Mir Ali in North Waziristan, a known hub for foreign militants with links to Al Qaeda, Pakistani intelligence officials said.

Eight Germans and a Briton — the terror cell said to be behind the Europe plot — were believed to have been in hiding in the region. Another Briton was killed in a US strike last month.

A German Foreign Ministry spokesman said yesterday that his office was checking the report of the latest strike.

He declined to be named, in keeping with policy.

However, the German police agency responsible for terrorism investigations, the Federal Criminal Police Office, said as many as 220 people have traveled from Germany to Pakistan and Afghanistan for paramilitary training, and at least 70 have received it.

A Pakistani intelligence official last week said there are believed to be about 60 Germans in North Waziristan now.

Intelligence officers said the house in Mir Ali, where yesterday’s missile strike occurred, is near a mosque and a hospital and is owned by a local resident, Sher Mullah.

Killing so many foreign militants in a single strike would be unusual.

In Washington, P.J. Crowley, State Department spokesman, said the travel advisory was issued because of extensive evidence of a plot.

“We specifically have said continue with your travel plans, but just be cautious because we are aware of active plots against the United States, American citizens, and other allies around the world,’’ Crowley said yesterday.

Despite the growing evidence of a terror plot, France, Britain, and Germany — the nations believed to be the targets of the scheme — have not changed their domestic terror threat levels.

Thomas de Maiziere, Germany’s interior minister, insisted his nation had no concrete evidence of an imminent attack. “There is no reason to be alarmist at this time,’’ de Maiziere said.

He said that he had spoken with Homeland Security Secretary Janet Napolitano about the travel advisory and that it is not “in keeping with our assessment of the situation.’’

The threat is being viewed differently by Washington and European capitals, and some analysts said it was a matter of approach.

Such differences have played out repeatedly in the years since the attacks on the United States on Sept. 11, 2001, they said.

Many tourists said they would be vigilant but would not change their plans.

“I’m very happy to be here in France. I think we’re very safe, and I trust the French government to keep us safe,’’ said James O’Connell, 59, of Pittsburgh.