Ex-Blackwater company among eight shut down 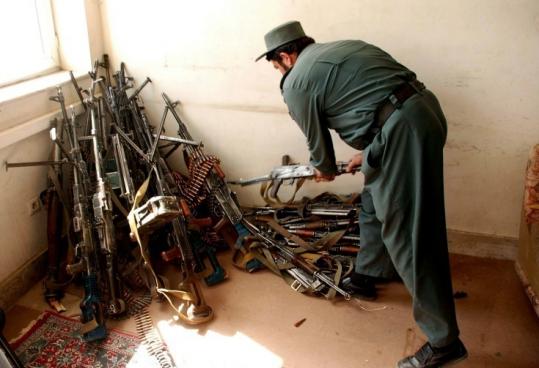 KABUL, Afghanistan — The Afghan government said yesterday it has started dissolving private security businesses in the country by taking steps to end the operations of eight companies, including the one formerly known as Blackwater and three other international contractors.

“We have very good news for the Afghan people today,’’ presidential spokesman Waheed Omar told reporters in the capital. “The disbanding of eight private security firms has started.’’

Afghan President Hamid Karzai announced in August that private security contractors would have to cease operations by the end of the year — wiping out an industry with tens of thousands of guards who protect military convoys, government officials, and businesspeople.

Some security contractors have been criticized for operating more like private militias, and the government said it could not have armed groups that were independent of the police or military forces.

Two large Afghan companies, White Eagle Security Services and Abdul Khaliq Achakzai, are on the list. The remaining two companies are small operations with fewer than 100 employees, so he declined to name them.

Xe, at least, has been the subject of investigations. In February, US Senate investigators said Xe hired violent drug users to help train the Afghan army and declared “sidearms for everyone’’ — even though employees weren’t authorized to carry weapons. The allegations came as part of an investigation into the 2009 shooting deaths of two Afghan civilians by employees of the company.

Omar said many of the companies had turned in weapons, some voluntarily. He did not say why the eight had been chosen as the first to be closed down, and if any international companies had actually left the country. A statement issued by the president’s office was more strongly worded, saying that the process of closing down the eight companies was “almost complete.’’

An owner of White Eagle, Sayed Maqsud, said his company had handed over weapons for a contract that was completed but was still employing guards under another contract.

“We are not shut down. Only we gave up 340 weapons,’’ Maqsud said, explaining that the company’s contract to guard fuel convoys for American troops in southern Helmand province had ended. He said he fired 530 guards who had been working under that program when the contract finished and handed over the guns to the government.

However, he said they have another 1,200 guards protecting cellphone towers for South Africa-based mobile phone company MTN, with plans to continue that unless the government says they have to close down.

Karzai’s original decree on private security companies gave an exemption to companies that guard the compounds of international embassies or organizations. It was unclear what this means for companies on the list that also have contracts to guard US government installations or other diplomatic missions.

Omar said the government was focused on security companies that are providing protection for highways or convoys, not those training Afghan forces or guarding embassies. He said the national security forces are not yet able to protect embassies and international organizations.

The US Embassy in Kabul said it was looking into what the decision would mean for US government contracts.

The Afghan government has estimated that 30,000 to 40,000 armed security guards are working in the country. The Interior Ministry has 52 security companies licensed, but some older contracts are still being completed by unlicensed operations. About half of the companies are Afghan-owned.