Hundreds direct fury at US, Obama 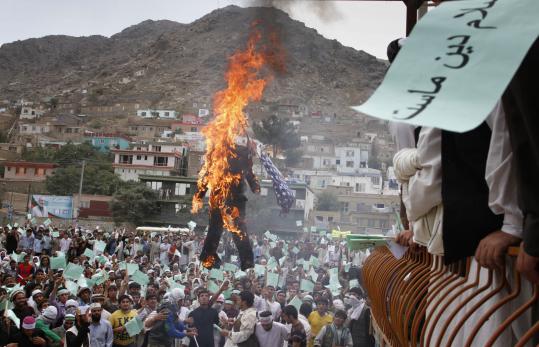 KABUL, Afghanistan — Hundreds of Afghans shouted anti-American slogans and called for President Obama’s death at a rally yesterday to denounce an American church’s plans to burn the Islamic holy book to mark the anniversary of the Sept. 11, 2001, terror attacks.

The crowd in Kabul, numbering as many as 500, chanted “long live Islam’’ and “death to America.’’

The protesters listened to fiery speeches from members of Parliament, provincial council deputies, and Islamic clerics, who criticized the United States and demanded the withdrawal of foreign troops from the country.

Some threw rocks when a US military convoy passed, but speakers shouted at them to stop and told police to arrest anyone who disobeyed.

The Dove World Outreach Center of Gainesville, Fla., announced plans to burn copies of the Koran on church grounds but has been denied a permit to set a bonfire. The church, which made headlines last year after distributing T-shirts that said “Islam is of the devil,’’ has vowed to proceed with the burning.

“We know this is not just the decision of a church. It is the decision of the president and the entire United States,’’ said Abdul Shakoor, 18, a high school student who said he joined the protest in Kabul after hearing about the Koran burning.

The US Embassy in Kabul issued a statement condemning Dove World Outreach Center’s plans, saying Washington was “deeply concerned about deliberate attempts to offend members of religious or ethnic groups.’’

Today, General David Petraeus, the top US and NATO commander in Afghanistan, warned that the church’s threat could endanger US troops in the country and Americans worldwide. Images of the burning of the holy book “would undoubtedly be used by extremists in Afghanistan — and around the world — to inflame public opinion and incite violence,’’ Petraeus wrote in an e-mail.

Protesters who had gathered in front of Milad ul- mosque yesterday raised placards and flags emblazoned with slogans calling for the death of Obama. They burned American flags and a cardboard effigy of Dove World Outreach Center’s pastor, Terry Jones, before dispersing peacefully. Muslims consider the Koran to be the word of God and demand that it, along with any printed material containing its verses, be treated with the utmost respect.

Also yesterday, NATO officials said Petraeus is asking for 2,000 more soldiers to join the international force here. It was unclear how many would be Americans.

Coalition officials said nearly half will be trainers for Afghan security forces and will include troops trained to neutralize roadside bombs, which have been responsible for about 60 percent of the 2,000 allied deaths in the nearly nine-year war.

The officials, who spoke on condition of anonymity because they were not authorized to discuss the issue with media, said the NATO-led command had been asking for the troops even before Petraeus assumed command in July.

Petraeus recently renewed that request with the NATO command in Brussels. The alliance has had trouble raising more troops for the war effort, with at least 450 training slots still unfilled after more than a year. There are about 140,000 foreign troops in Afghanistan now.

With casualties rising, the war has become deeply unpopular in many of NATO’s 28 member countries, suggesting the additional forces will have to come from the United States. In Europe, polls show the majority of voters consider it an unnecessary drain on finances at a time of sharp cuts in public spending.

An additional 30,000 US service members have been sent to Afghanistan as part of a surge aimed at suppressing the Taliban insurgency that has claimed the lives of more than 1,100 US troops.

The extra trainers are considered essential to meeting the goal of increasing Afghanistan’s army and police to 400,000 by next year. The United States expects to spend about $6 billion a year training and supporting Afghan troops and police after it begins pulling out its own combat troops in 2011, according to estimates of US military spending through 2015, which are detailed in a NATO document obtained by the Associated Press.