Some observers see a change in N. Korea focus 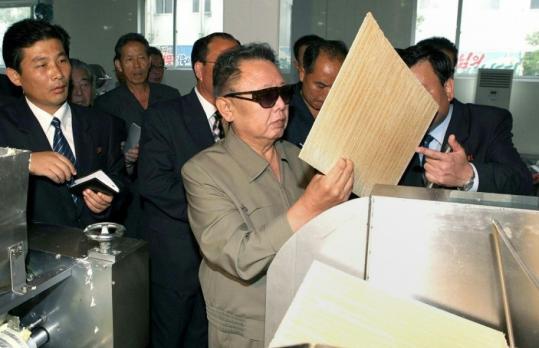 WASHINGTON — The behavior of reclusive North Korean leader Kim Jong Il often baffles even the most seasoned American diplomats. Once, he ordered the kidnapping of a Japanese film star and her director husband in an attempt to build a film industry in North Korea. Another time, he imported Italian chefs to build him a state-of-the-art pizza oven at a time when millions of his countrymen were starving.

But Kim’s treatment this week of former president Jimmy Carter, who traveled to Pyongyang to secure the release of a Boston man who had illegally entered the country, has struck some observers of North Korea as especially mystifying. Kim, who usually goes out of his way to try to coax American officials to Pyongyang for highly publicized meetings, did not meet with Carter and instead reportedly left the country for China.

That decision to forgo a valuable propaganda opportunity set off a flurry of speculation in Washington yesterday about the message he was trying to send.

Charles Jack Pritchard, who served as a special envoy for negotiations with North Korea under President George W. Bush, said that the fact the North Korean regime demanded a high-level US visit to secure Gomes’s release, and then snubbed it, was an attempt to humiliate the United States.

“The intent was to exact a penalty from the United States and simply say, ‘You guys disrespect our laws and you want us to release him after he has been found guilty,’ ’’ said Pritchard, who has traveled to North Korea 10 times and is one of the few US diplomats to have contact with the government. “Carter must be seething with embarrassment.’’

Deanna Congileo, Carter’s spokeswoman, did not respond to a question about his treatment, saying he was not doing one-on-one interviews about his trip.

South Korean news reports said Kim went to China to meet with President Hu Jintao, in a border province that has benefited from increased trade.

John Park, director of the Korea working group at the Washington-based US Institute of Peace, said Kim’s trip underscored the fact that North Korea is placing a higher priority on strengthening its relations with China — already its most important ally — than courting the United States.

“It just shows you how far developed the Chinese-North Korean relationship is,’’ Park said. “It shows that the North Korean-US relations are in a stalemate.’’

Those relations have been at a low point since multinational talks broke down on attempts to dismantle North Korea’s nuclear program and since North Korea was blamed for sinking a South Korean warship in March, killing 46 sailors.

A senior congressional aide who closely follows North Korea said it could be a positive sign that Kim did not seek to use Gomes to his political advantage by showcasing himself with the former president.

“They didn’t play politics with his release,’’ said the aide, who was not authorized to be quoted by name. “For Carter, this mission was to bring home Gomes. The snub would have been returning empty-handed.’’

The aide warned that policy makers know so little about Kim that is almost impossible to understand him.

Last year, Kim arranged an elaborate meeting with television cameras during a visit by former president Bill Clinton, who was sent on a humanitarian mission to secure the release of two American journalists who were also accused of crossing the border illegally.

That visit contained special significance for Kim because he had expected a visit from Clinton during his presidency in 2000, after a diplomatic breakthrough between the two countries, but Clinton did not go, publicly embarrassing Kim.

But Carter’s visit also had symbolic importance, Park said. Carter traveled to Pyongyang in 1994 and succeeded in easing tension between the United States and North Korea, setting the stage for an agreement aimed at disarming North Korea’s nuclear weapons in exchange for aid.

Carter’s 1994 visit took place when the country was led by Kim Il Sung, the father of Kim Jong Il. At the time, Carter sought to meet Kim Jong Il, who declined, according to Pritchard.

“He didn’t want to meet him 16 years ago,’’ Pritchard said. “I wish I knew why. It would be an insight into how he thinks.’’