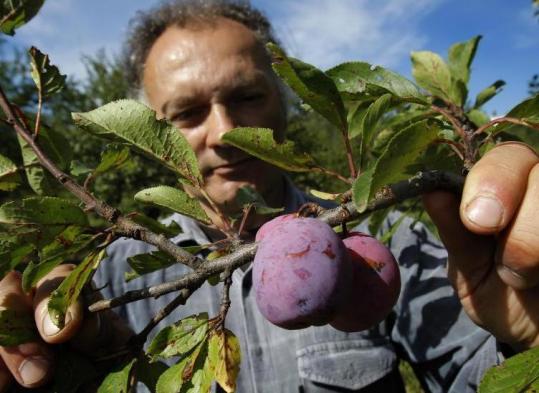 Sergei Gandrabur, an agronomist at the Pavlovsk Agricultural Station, said moving the plants to other fields is not feasible. (Dmitry Lovetsky/Associated Press)
By Irina Titova Associated Press / August 22, 2010

PAVLOVSK, Russia — The world’s first seed bank survived World War II thanks to 12 Russian scientists who chose to starve to death rather than eat the grain they were saving for future generations.

Now the Vavilov Institute of Plant Industry’s seed bank is in danger again, this time because of court-approved plans to rip up its vast fields of genetically diverse plants and build fancy homes on the prime real estate they occupy near St. Petersburg.

International organizations dedicated to agricultural diversity have appealed to President Dmitry Medvedev to save the Pavlovsk Agricultural Station, which they say could be crucial for sustaining fruit crops worldwide as climate change and other threats weaken existing varieties.

Medvedev has ordered an investigation, but with the first plot of station land to go on the auction block on Sept. 23, scientists worry that a decision may come too late. “If we lose those lands . . . many kinds of plants will become extinct forever,’’ said Fyodor Mikhovich, head of Pavlovsk Agricultural Station.

The agricultural station is facing the loss of 225 acres on which it grows one of the world’s largest field collections of fruits and berries, including almost 1,000 types of strawberries from 40 countries, 300 varieties of cherries, and almost 900 kinds of black currants. It also has a rich variety of grasses and grains, though the institute’s larger grain fields are located elsewhere.

As many as 90 percent of the plants are no longer found anywhere else in the world. Most of them are old varieties no longer in use, but the Vavilov Institute maintains them in case they will be useful in the future for developing new varieties.

Moving the plants to other fields is not feasible, said Sergei Gandrabur, an agronomist at the station, as he looked out over sprawling strawberry fields last week. He said the plants might not survive being transplanted.

While the strawberries have already been harvested, the fruit is now ripening on long rows of plum, apple, and pear trees.

The federal fund that oversees residential housing construction won court approval this summer to take over the land, which it insists contains nothing of value. Fund spokesman Andrei Tikhonov said specialists visited the site several times and found nothing but weeds on one land plot and mowed grass on the other. “They probably do have this unique collection, but not on our land plots,’’ the spokesman said.

He said the agricultural station had petitioned three years ago to use the same land plots for housing development, but was denied. Tikhonov accused the station’s management of being motivated by its own commercial interests.

Medvedev sent a message on his Twitter page recently saying he “gave the instruction for this issue to be scrutinized.’’ The government Audit Chamber said it will meet Friday to decide how to proceed.

An international appeal to save the Pavlovsk fields was organized by the Rome-based Global Crop Diversity Trust, which launched a “Tweet Medvedev’’ campaign and put together a petition, which it said was signed by thousands of people all over the world.

Bioversity International, also based in Rome, said its general director wrote to Medvedev asking him to intervene.

“The fruit and berry varieties that have been stored and studied at Pavlovsk since it was founded have a vital role to play in the future of Russian and global agriculture,’’ Bioversity general director Emile Frison said on the organization’s website.

“Russia is currently being ravaged by the hottest summer on record,’’ he said. “That is just a taste of changes to come, and crop diversity will be a vital weapon in the fight to produce enough food in future.’’

Cary Fowler, executive director of the Global Crop Diversity Trust, said it was “a bitter irony that the single most deliberately destructive act against crop diversity could be about to happen in Russia of all places — the country that invented the modern seed bank.’’