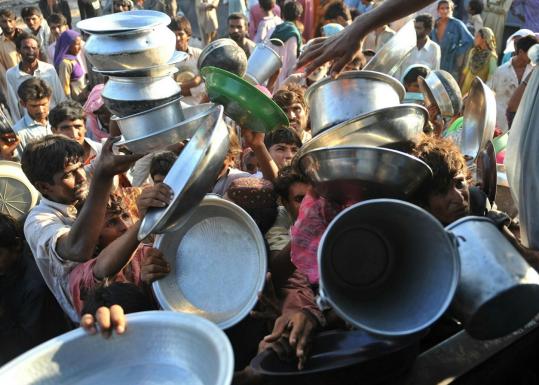 UNITED NATIONS — With monsoon rains continuing in Pakistan yesterday and water-borne diseases reportedly spreading, international relief officials said the pace of aid donations was still not sufficient to deal with what might be the nation’s worst disaster.

“The scale of the response is still not commensurate with the scale of the disaster of almost unprecedented magnitude,’’ said Martin Nesirky, the spokesman for UN secretary general Ban Ki-moon, reading a statement from the humanitarian affairs office. “This is a catastrophe that continues to unfold.’’

The United Nations, which had been saying that up to 6 million people needed some manner of emergency assistance — shelter, food, drinking water, or medical care — estimated that figure could reach 8 million.

Since the weekend the pace of pledges to the UN’s $460 million appeal has accelerated, Nesirky said, but it remains short of its target.

“The funding response to the floods is improving, but much more is needed,’’ he said. “The effort must be sustained in the days and weeks ahead in order to have the resources to reach the people who desperately need help.’’

Shortages of the most basic supplies presented the biggest challenge for aid workers in Pakistan, along with the logistics of how to deliver them across a vast part of the country lacking infrastructure.

The World Health Organization said yesterday that of the more than 15 million people the floods are estimated to have affected, only about 1.2 million had access to safe water supplies.

In the most inundated areas, 200 of 1,167 health facilities — including several hospitals — were damaged. Reports of respiratory tract infections and fatal diarrhea were growing.

The UN began an appeal Aug. 11 for $460 million to provide immediate aid to flood victims. By yesterday, nations, organizations, and individuals had sent $231 million, and had pledged an additional $40 million.

Not all the aid was flowing through the United Nations. Britain, for example, has sent more than $40 million, and the European Union said it would double its aid to more than $90 million.

Although the disaster has fallen in the Muslim holy month of Ramadan, when charity is considered a duty, Muslim states have donated virtually nothing via the UN and relatively small sums on their own. Turkey was the largest such donor, with more than $11 million, and Kuwait gave $5 million, UN figures show.

Saudi Arabia has pledged more than $80 million, but UN records indicate none of it has been delivered.

To illustrate the size of the need, Maurizio Giuliano, a spokesman for the UN relief effort in Pakistan, said aid agencies had received 935,000 tents, but more than double that number were needed.

The UN and the aid agencies through which it works have thus far delivered food to nearly 800,000 people, have helped get clean water to at least 1.4 million, and have provided shelter to nearly 1 million. Medical stocks covering the potential health needs of 1.8 million people have also been provided.

“The Indus River is at 40 times its normal volume,’’ said Karen Allen, a UNICEF official in Islamabad, the capital. “Whole cities of up to 250,000 people have been evacuated, and people have lost everything.’’

Two organizations that are taking donations for the relief effort:

CARE
www.care.org
800-422-7385
In its mission to provide lifesaving aid to flood victims, CARE is supporting health care teams, mobile clinics, and the distribution of emergency supplies.