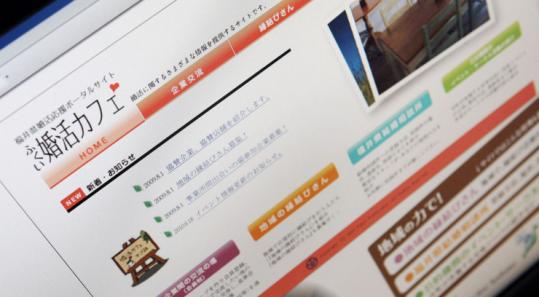 The government in Fukui is starting the Marriage-Hunting Cafe, a website for singles, to help stem the falling birthrate. (Fukui Prefectural Government)
By Aki Ito Bloomberg News / August 15, 2010

TOKYO — The coastal region of Fukui has Japan’s biggest share of dual-income households, the highest ratio of working women, and the lowest unemployment rate. What it does not have is enough babies.

This month, the provincial government is starting the Fukui Marriage-Hunting Cafe, a website for singles, to help stem the falling birthrate. Couples who agree to marry will get cash or gifts, said Akemi Iwakabe, deputy director of Fukui’s Children and Families division.

“Many of our single residents were telling us that they wanted to get married, but couldn’t because they weren’t meeting anyone,’’ she said.

Japan’s first online dating service organized by a prefectural government follows national measures to extend parental leave that have so far failed to convince women to have more children. The fertility rate has dropped to 1.34 children per woman, shrinking the pool of workers and consumers and increasing the burden on younger employees to pay for an aging population.

“It’s difficult to breathe life back into an economy without children, without young people,’’ said Naoki Iizuka, an economist at Mizuho Securities here.

The Organization for Economic Cooperation and Development estimates that the number of working-age Japanese will drop to 81 million this year, compared with the 1995 peak of 87 million. The average number of children that Japanese women have compares with Canada’s 1.6 and France’s 2, according to the World Bank. The 2.1 rate in the United States is considered the minimum for a developed nation to maintain a constant population.

Japan’s leaders must take more aggressive measures to help young people raise families, or the baby shortage will accelerate, said Iizuka. About 23 percent of the population is over 65.

Key to boosting the birthrate is getting couples to marry. Three-fourths of the decline in Japan’s fertility rate between 1975 and 2005 can be explained by the decision of more women to delay or forgo marriage, according to Miho Iwasawa, a researcher at the National Institute of Population and Social Security Research.

The Democratic Party of Japan came to power last year promising to lighten the burden of childrearing. Families started receiving monthly allowances of $150 per child this fiscal year.

Even so, national and local governments need to reach the unmarried, whose rising proportion in the country is the biggest factor behind the shortage of children, said Shigeki Matsuda, a sociologist at Dai-Ichi Life Research Institute here.

“The root problem is this: They don’t have financial stability,’’ he said. “That’s a problem with their employment opportunities that can’t be resolved by dating support.’’

Fukui’s service will compete with a host of private online dating services.