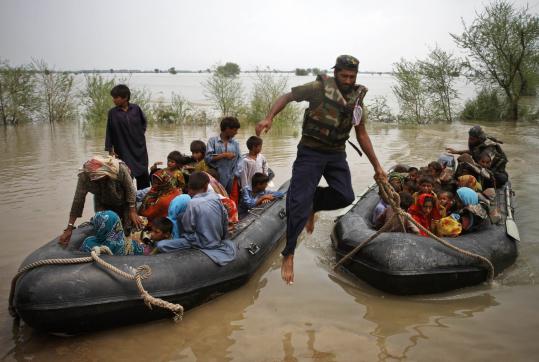 US military personnel waiting to fly Chinooks to stranded communities in the upper reaches of the hard-hit Swat Valley were frustrated by the storms, which dumped more rain on a region where many thousands are living in tents or crammed into public buildings.

In the Sukkur area of Sindh Province in southern Pakistan, 70 villages had been flooded over the last 24 hours, the navy said. Saleh Farooqi, head of the Provincial Disaster Management Authority in Sindh, said authorities had removed about 200,000 people from areas where floodwaters could hit, but many more were still living in the danger zone.

Over the last week, floods triggered by monsoon rains have spread from the northwest down Pakistan, killing about 1,500 people. They were faster and more destructive in the northwest, where waters were receding yesterday. The floods were moving south along the River Indus, causing less damage but inundating hundreds of villages.

Some 30,000 Pakistani soldiers are rebuilding bridges, delivering food and setting up relief camps in the northwest, which is the main battleground in the fight against Al Qaeda and the Taliban. Foreign countries and the United Nations have donated millions of dollars.

About 85 US military personnel are taking part in the relief activities along with six helicopters that were flown over from Afghanistan, where some 100,000 American troops are based battling the Taliban.

In a televised address to the nation, Prime Minister Raza Yousuf Gilani said it was the worst flooding in Pakistan’s 63-year history. The United Nations said the disaster was on a par with the 2005 Kashmir earthquake — which killed about 73,000 people — in terms of the numbers of people needing assistance and damage to infrastructure.

All helicopters currently stationed in the northwest were grounded because of poor weather, said Amal Masud, a spokeswoman for the National Disaster Management Authority.