52 dead; US says a team is investigating 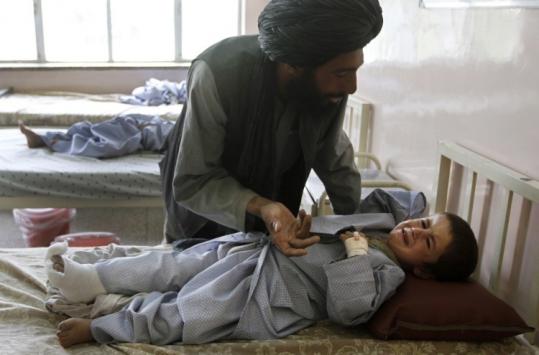 Abdul Ghafaar comforted his nephew at a hospital in Kandahar, Afghanistan, Saturday after a firefight in Sangin. (Associated Press)
By Richard A. Oppel Jr. New York Times / July 27, 2010

KABUL, Afghanistan — Afghan officials said yesterday that 52 people were killed in southern Afghanistan on Friday when a rocket fired by coalition forces hit a house where women and children had taken shelter from fighting between NATO troops and militants. US officials disputed the account.

If the toll is accurate, the attack will be one of the worst cases of civilian casualties in the nine-year war. It comes as a leak of thousands of military documents casts new doubts on whether US and coalition forces have done enough to avoid civilian deaths, and whether all of them have been reported by the military.

The Afghan government said its information about the reported rocket attack, which took place in the Sangin district of Helmand province — one of the deadliest areas for NATO troops in recent years — originated with its own intelligence service, the National Directorate of Security.

But late yesterday, the US-led military command in Kabul said that an investigation it was conducting with Afghan officials “has thus far revealed no evidence of civilians injured or killed.’’ But it was not clear whether the NATO investigative team had yet reached the scene.

Interviewed by telephone, witnesses from the area where the attack was supposed to have taken place said that Friday a US military force engaged Taliban militants in an intense firefight in two remote villages. Taliban fighters warned residents to leave. Many fled to Rigi, a remote village with only a half-dozen homes.

Women and children from about eight families were packed into one home, while many of the men took shelter in the forest around the village, they said. About 4:30 p.m. they heard the first of two powerful explosions that blanketed Rigi in smoke as military aircraft flew overhead, the villagers said.

One resident, Mohammed Usman, 57, said he helped pull the bodies of 17 children and seven women from the rubble. “They have ruined us, and they have killed small children and innocent women,’’ he said. “God will never forgive them.’’

Another resident, Abdul Samad, said: “They targeted an area which we believed was safer, but in one hit they killed over 50 people. Most of them were children and women, and I have lost my relatives as well.’’

He said US forces came to Rigi the next day and said they had fired because they had observed a man carrying a weapon.

President Hamid Karzai condemned the attack as “both morally and humanly unacceptable.’’

But NATO military officials said the accounts of an attack were far from proved.

“Any speculation at this point of an alleged civilian casualty in Rigi village is completely unfounded,’’ said Rear Admiral Gregory J. Smith, director of communications for the US and NATO military coalition. “We are conducting a thorough joint investigation with our Afghan partners and will report any and all findings when known.’’

Another military spokesman, Lieutenant Colonel Todd Breasseale, added, “If the government of the Islamic Republic of Afghanistan has something that has been determined by means other than the joint Afghan/NATO investigation, we are unaware of it.’’

A senior US military official also said there was frustration over Karzai’s decision to issue the statement without coordination with NATO officials.

Initially, Afghan officials in Helmand said they were unaware of any attack on civilians. But yesterday, Daoud Ahmadi, the provincial governor’s spokesman, said officials had confirmed that the attack killed women and children, but he said he did not know how many.

If the Afghan government’s account is accurate, it would mean the largest number of civilians were killed in any attack since September, when more than 100 people died in a bomb strike called in by the German military in Kunduz province.

The controversy could pose a challenge to the new US and NATO commander, General David H. Petraeus.

Last summer, General Stanley A. McChrystal, then the US commander of forces in Afghanistan, tightened the military’s rules for using force, trying to avoid civilian casualties that undercut Afghan support for the war effort.

While senior military commanders have said they believe no troops have been denied close air support, McChrystal’s directive has drawn strong criticism from many troops and families of service members who believed the new restrictions put soldiers and Marines at a disadvantage against Taliban insurgents.