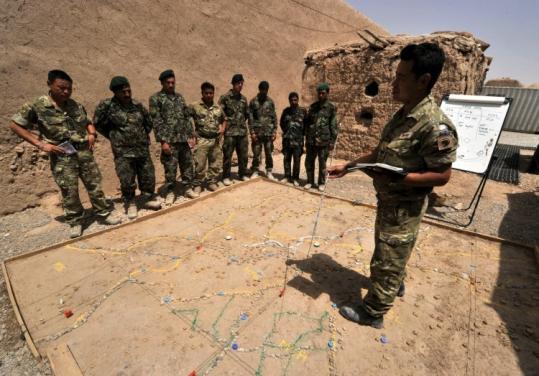 WASHINGTON — The United States has often overestimated the ability of Afghan military and police units to fight on their own, jeopardizing the strategy to win the war and bring troops home, according to an independent report released yesterday.

The investigation is the first objective look at the rating system the military has used for the past five years to judge the effectiveness of Afghan troops. Its findings contradict upbeat assessments recently provided by senior military commanders overseeing the war.

The capability of Afghan forces is considered the single biggest indicator of whether the war is going well and is seen as the linchpin in the US strategy since the war began more than eight years ago.

Lawmakers are likely to use the latest findings to question President Obama’s handling of the war. Democrats say they are frustrated that Obama is sending more US troops into combat without assurances that Afghan forces are close behind.

“I think the worst nightmare for the Taliban is an Afghan army in charge,’’ said Senator Carl Levin, a Michigan Democrat who chairs the Armed Services Committee.

The United States has spent $27 billion on the effort — about half of the money it has poured into rebuilding Afghanistan. But the program has been hobbled by a shortage of trainers and available Afghans, and by spikes in violence.

“The bottom line to this is that the system . . . is flawed, it’s unreliable, and it’s inconsistent,’’ said Arnold Fields, who led the study as the special inspector general for Afghanistan reconstruction.

General Stanley McChrystal, who was fired last week as the top US general in the Afghanistan war, told the Army yesterday that he will retire.

Colonel Tom Collins, an Army spokesman, said McChrystal, 55, notified the service of his plans but has not yet submitted formal retirement papers. It is not clear when he will leave the service, but the process usually take a few months.

The Army has been McChrystal’s only career. He was promoted to the coveted rank of four-star general last year

Two weeks before he was fired by Obama, McChrystal told reporters that the Afghan forces’ “growth is on track’’ and “we’re ahead of the plan.’’ But the report found that the system used to judge that success was deeply flawed.

In some cases, units with the same rating would have different abilities. Also, highly rated units often regressed as soon as US mentors withdrew.

In one stark example, a police district in the northern Afghan province of Baghlan was given the top rating by NATO officials in August 2008. The “CM1’’ designation meant the police were independently capable of conducting operations. But when investigators asked to visit the district in February, they were told the district was not secure and was overrun with insurgents.

One official told investigators that the police force had “withered away to the point that it barely functions.’’

Levin said the United States should delay major operations in the southern town of Kandahar until more Afghan troops can deploy to the fight. He called it “totally unacceptable’’ that there are only about 5,300 Afghan forces in Kandahar and 6,900 coalition troops being led by the United States.

Fields said that the NATO headquarters in Afghanistan was briefed on his findings in March. Officials agreed in April to change the rating system.

In a written response, NATO says it has made significant progress in both training Afghan forces and measuring their effectiveness in recent months.