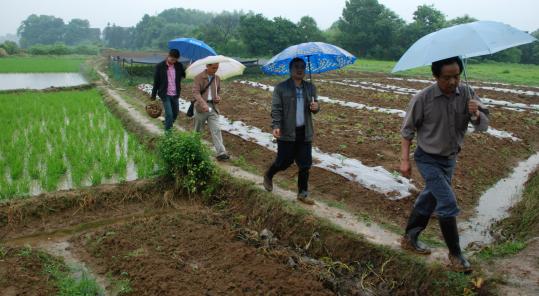 Lin Minyue (right), a professor at Hunan Agricultural University, has been advising potato farmers in Hunan Province since 2005. Farmers plant potatoes in rice fields during the winter, a move that improves the soil for the next season’s rice cultivation. (Lauren Keane/Washington Post)
By Lauren Keane Washington Post / June 18, 2010

JIUTIAOLONG, China — In the land of rice, China is looking at an unlikely tool for maintaining growth and social harmony: the potato.

The Chinese government has begun ramping up research, production, and training related to the humble spud, and hopes are high that it could help alleviate poverty and serve as a bulwark against famine.

The challenge of feeding a growing nation on a shrinking supply of arable land while confronting severe water shortages has long been a major concern here. China has to feed one-fifth of the world’s population on one-tenth of its arable land, and the nation’s expanding cities are consuming farmland at breakneck speed. China estimates that by 2030, when its population is expected to level off at roughly 1.5 billion, it will need to produce an additional 100 million tons of food each year.

That statistical reality could change eating habits. Potatoes need less water than rice or wheat, and they yield far more calories per acre. In regions of southern China, farmers can squeeze a round of fast-growing potatoes into their rice fields between planting seasons. In some of the poorest parts of arid northern China, potatoes are among the few crops that grow.

“Potatoes have so much potential here,’’ said Xie Kaiyun, a leading potato scientist at the Chinese Academy of Agricultural Sciences, a government think tank.

“Rice, wheat, corn — we’ve gone about as far as we can go with them. But not the potato.’’

Ever keen to seize opportunity, Chinese entrepreneurs are turning potatoes into forms more familiar to Chinese palates: buns, noodles, cakes. They are developing exotic varieties and have even sent seeds into orbit, saying that zero gravity makes them more nutritious and charging astronomical premiums for the seeds’ offspring back on Earth.

Potatoes won’t replace rice or wheat as mainstays of Chinese cuisine anytime soon, if ever. They are eaten as side dishes, and the government has not yet named them a staple, a distinction that would mean preferential treatment in domestic markets and would carry significant cultural weight.

But they are increasingly seen here as an underutilized resource.

China produces and consumes more potatoes than any other country. But that’s largely because of its huge population. The Chinese lag in per capita terms, eating one-third the amount of potatoes that Russians do and two-thirds the amount Americans eat.

The average acre of potato plants in China yields far fewer edible spuds than in other developing countries, mostly because farmers plant cheap, disease-prone seed. China’s national and local governments are trying to change that by increasing potato funding, hoping the investments will raise rural incomes and help maintain social stability by keeping farmers on their land in the country’s poorest areas.

Researchers from Hunan Agricultural University started working with the province’s potato farmers in 2005 and last year used government grant funds to provide training and seeds. Farmers plant in rice fields during the winter, when the land would otherwise produce nothing; potato plants then improve the soil for the next season’s rice cultivation.

It’s a good time to be in the Chinese potato business. Wholesale prices increased 85 percent from November to April, thanks in part to a severe drought in the nation’s southwest that has limited supply.

“We earn the same from one potato crop that we get from three rice crops’’ or 10 cabbage crops, said Huang Weihua, 40, the leader of the local farmers association. He pointed to his house, a two-story structure. His son was hard at work remodeling the first floor — potato money, Huang said.