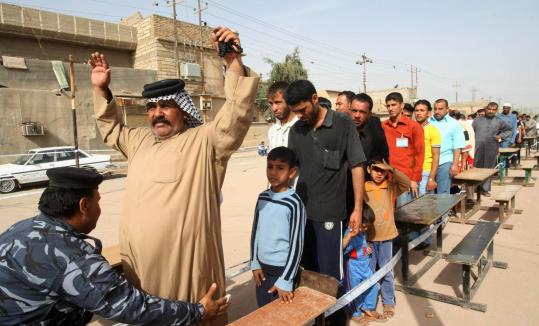 A policeman frisked a man in line to vote at a polling center in Basra, Iraq. At least 38 were killed in Baghdad. (Essam Al-Sudani/ AFP/ Getty Images)
By Steven Lee Myers New York Times / March 8, 2010

BAGHDAD - Defying a sustained barrage of mortars and rockets in Baghdad and other cities, Iraqis went to the polls in large numbers yesterday to choose a new Parliament meant to outlast the American military presence here.

“Iraqis are not afraid of bombs anymore,’’ said Maliq Bedawi, 45, defiantly waving his finger stained with purple ink to indicate he had voted, as he stood near the rubble of an apartment building in Baghdad hit by a huge rocket in the deadliest attack of the day.

Insurgents here vowed to disrupt the election, and the concerted wave of attacks - as many as 100 blasts in the capital starting just before the polls opened - frightened voters away, but only initially. The shrugging response of voters could signal a fundamental weakening of the insurgency’s potency.

At least 38 people were killed in Baghdad. But at the end of the day, turnout was reported to be higher than expected, and certainly higher than in the last parliamentary election in 2005, marred by a similar level of violence. About 60 percent of the voters turned out in that election, according to Iraqi officials.

Sunnis who largely boycotted previous elections voted in force, and an intense competition for Shi’ite votes drove up participation in Baghdad and the south, election observers said.

The short and fierce political campaign could end up solidifying Iraq’s nascent democracy or leaving the country fractured along ethnic and sectarian lines. But it was arguably the most open, most competitive election in the nation’s long history of colonial rule, dictatorship, and war.

Despite a long delay, disputes over candidates’ qualifications, arrests, assassinations and finally an all-out assault by insurgents yesterday morning, the election took place with only a few reports of irregularities. And by last night, something rare was emerging in a region dominated by authoritarian governments: an election cliffhanger.

Official results are not expected for days, but after the polls closed at 5 p.m., party leaders said two coalitions seem to have fared best: the State of Law Coalition, led by Prime Minister Nouri Kamal al-Maliki, who has campaigned for a second time on improved security in Iraq, and Iraqiya, led by the former interim leader, Ayad Allawi, who has promised to overcome Iraq’s sectarian divides.

Other major groups vying for power include the Iraqi National Alliance, a religious Shi’ite coalition backed by radical cleric Moqtada al-Sadr; the Iraq Unity Alliance, led by Interior Minister Jawad al-Bolani, a Shi’ite; the Iraqi Accordance, the main Sunni bloc in Parliament; and the Kurdish Alliance, made up of four Kurdish parties.

As expected, neither Maliki’s nor Allawi’s coalitions appeared to have secured an outright majority of seats in the country’s new 325-member Parliament, and so it was unclear whether Maliki had succeeded in winning another four years in office.

That sets the stage for a period of turmoil - months, not weeks, politicians here predict - as the winning coalition tries to cobble together enough votes to elect a prime minister.

Maliki’s supporters were saying that his coalition had won a majority of votes in Baghdad, Basra, Najaf, and other largely Shi’ite provinces in the south. And Allawi, also a Shi’ite, emerged as the unexpected standard bearer of a bloc that appears to have done best among Sunnis in Anbar, Salahuddin, Nineveh, and Diyala.

After seven years of a war whose rationale remains deeply disputed in the United States, the Obama administration looked to the election as a test of the country’s stability, a last milestone before the final withdrawal of American troops.

“I have great respect for the millions of Iraqis who refused to be deterred by acts of violence and who exercised their right to vote today,’’ President Obama said in a statement. “Their participation demonstrates that the Iraqi people have chosen to shape their future through the political process.’’

Obama said the United States planned to meet the Aug. 31 deadline for withdrawal of combat troops, and remove the remaining 50,000 US troops by the end of next year. There are fewer than 100,000 American forces in the country.

Yesterday’s insurgent attacks began even before polls opened, with explosions reverberating through the early-morning haze. For awhile at least, the intensity of the barrage recalled the worst days of bloodshed in 2006 and 2007, when Iraq teetered on the precipice of civil war.

Dozens of mortar shells and rockets crashed down on the capital, including at least six that landed in the Green Zone, where government ministries and embassies are clustered behind heavy fortifications. At least 13 bombs exploded.

The deadliest attack occurred when what the police said was a Katyusha rocket collapsed the apartment building, in the Ur neighborhood in northeastern Baghdad. At least 10 people in that attack died, according to witnesses and the owner of the building, but the Interior Ministry later said 25 were killed there.

Bedawi, who witnessed the carnage, said the attack hardened the resolve of Iraqis to vote. “Everyone went,’’ he said. “They were defiant about what happened. Even people who didn’t want to vote before, they went after this rocket.’’

The extensive use of mortars and rockets suggested that a weakened insurgency had to shift tactics, perhaps because it was unable to maneuver cars or suicide bombers into the cities because of the intense security lockdown, with checkpoints erected every few hundred yards in some places.

The insurgents still fighting in today’s Iraq face a far stronger government, capable now of saturating the country with police and soldiers. Even more important, they face an Iraqi people far less willing to support, or even sympathize with, violent resistance against the country’s nascent democratic government.

The attacks united Iraq leaders across party lines. “These are the messengers of Iraq’s enemies, the enemies of democracy,’’ said Ammar al-Hakim, a leader of the Iraqi National Alliance. “It is a desperate and weak message.’’

The violence was not limited to Baghdad, though it was less lethal outside the capital.

A bomb blast at a polling station killed a police officer in Mahmoudiya, about 20 miles south of Baghdad, the Associated Press reported.

In Anbar Province, west of Baghdad, at least 20 explosions rang through the city of Fallujah beginning at 8 a.m., but no one was reported killed.

A roadside bomb exploded in Kirkuk, while two struck in Mosul, in northern Iraq, including one near a polling station that wounded seven.

Attacks also struck across Diyala, the volatile province northeast of Baghdad. Two of them were improvised bombs that struck an American and an Iraqi convoy, according to security officials there. At least four people were wounded, two of them Iraqi soldiers.

The competition among the main Shi’ite parties, divided this time unlike in 2005, could be decisive.