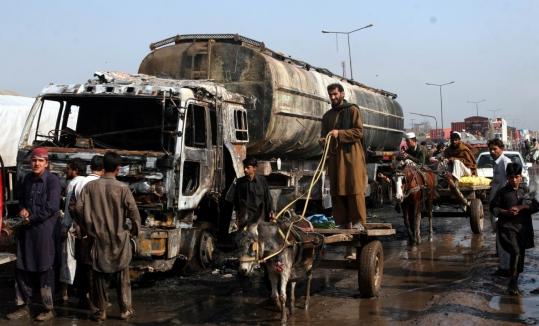 KANDAHAR, Afghanistan - Six NATO service members died yesterday in separate attacks across Afghanistan, including a suicide car bomb that targeted an international military convey as it crossed a bridge in the Taliban-dominated South, the coalition said.

The deaths came as American and Afghan forces worked to consolidate control over the former insurgent stronghold of Marja in the southern province of Helmand, where allied forces are waging the largest combined offensive of the eight-year-old war.

The suicide attacker waited in a taxi for the NATO convoy to cross the bridge between Kandahar and the airport, then detonated his explosives, sending a military vehicle into a ravine, said Inhamullah Khan, an Afghan army official at the site.

A NATO spokesman, Major Marcin Walczak, confirmed that one service member died. He did not provide the nationality or other details.

Four Afghan civilians died in the bridge attack, the Interior Ministry said. Three of them were in a car that had pulled over nearby to wait for the convoy to cross the bridge, which the military regularly sweeps for explosives, Khan said.

Kandahar is the capital of the province of the same name that is considered the spiritual birthplace of the Taliban. It lies east of Helmand province, where thousands of US, NATO, and Afghan troops are conducting an offensive to wrest control of the town of Marja from insurgents.

Marja has long been controlled by the Taliban, and the assault is seen as the first step in a multimonth offensive that will eventually target insurgent strongholds around Kandahar city.

Advances by US and Afghan forces in and around Marja have been hampered by thousands of buried explosives left behind by the Taliban. A civilian car hit one of the roadside bombs yesterday as it entered the city limits of Lashkar Gah, the major town north of Marja.

Another roadside bomb killed two employees of a construction company who were riding in a company vehicle on a road north of Lashkar Gah district, an Interior Ministry statement said.

The two-week-old Marja offensive, involving thousands of American troops along with Afghan soldiers, is the largest combined assault since the 2001 US-led invasion to oust the Taliban’s hard-line Islamist regime.

The allied forces have cleared most of Marja and are working to secure the area, though NATO has warned there could be pockets of violence for weeks.