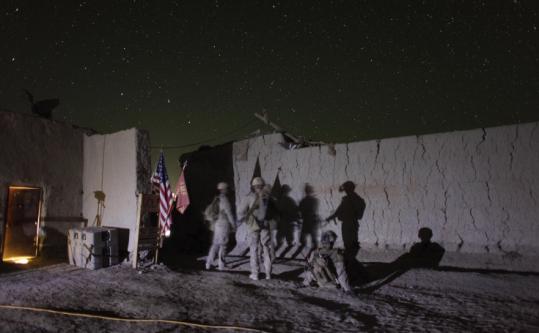 US Marines gathered outside a combat outpost before a night mission in Afghanistan’s Helmand Province in October. A UN report said 98 civilians were killed during night raids in 2009. (Brennan Linsley/ Associated Press/ File)
By Tini Tran Associated Press / February 25, 2010

KABUL, Afghanistan - American troops knocked on the door, and before the Afghan family could find the key to let them in, the soldiers broke it down.

There was no time to take women in the home to another place, said 77-year-old Mohammad . And that’s what troubled the retired schoolteacher most about the intrusion in the southern town of Marja.

“If they ask us to take our women and daughters in another place, and then they do the search, we have no problems,’’ Nabi told a reporter. “We will cooperate with them. But they just enter the house and start searching, and they don’t care who is there.’’

A new directive, confirmed yesterday by General Stanley McChrystal, aims to limit such nighttime raids on civilians. It was prompted by a storm of complaints from Afghans who were enraged because foreign soldiers burst into their homes.

The move is the most recent by coalition forces to woo Afghans away from the Taliban.

“We didn’t understand what a cultural line it was,’’ McChrystal said during a luncheon with young Afghans involved in a leadership program. The luncheon was part of a series he regularly holds to hear Afghan public opinion.

Such raids emerged as the top concern by Afghans after McChrystal limited the use of air strikes, which were responsible for the bulk of civilian deaths. He said the directive, whose details remain classified, was issued in late January. The change was confirmed only yesterday.

A number of groups, along with the Afghan government and civilians, had been pressuring NATO to rethink the nighttime operations.

“Night raids cause tremendous trauma within Afghan communities, often alienating the very people whom international forces are supposedly trying to protect,’’ said a report this week by the Open Society Institute, which is a New York-based group that promotes democracy, and an Afghan organization focusing on social development, The Liaison Group.

Raids can often turn violent, with detainees kicked or beaten while handcuffed, the report said. It cited a UN report that said 98 civilians were killed during night raids in 2009.

Lieutenant Colonel Todd Breasseale, NATO spokesman, said that he could not give specifics on the directive but that it does not limit the ability of troops to operate.