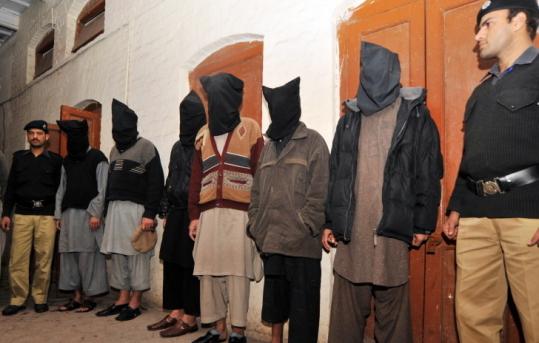 LAHORE, Pakistan - Authorities arrested six suspected Taliban militants with a suicide vest and hand grenades who allegedly were on their way yesterday to attack a five-star hotel and kill Americans in Pakistan’s cultural capital, said police.

The eastern city of Lahore has suffered a spate of bombings at markets and security installations in recent years as the Taliban have expanded attacks beyond their main sanctuary in the northwest.

Militants have also targeted hotels and restaurants in other parts of Pakistan popular with Westerners.

The militants arrested yesterday on the outskirts of Lahore included a 14-year-old male and a prayer leader from Pakistan’s Khyber tribal area near the Afghan border, said Zulfikar Hameed, a police official.

The prayer leader was wearing a vest packed with explosives. The two told police they were targeting Americans at the Pearl Continental hotel, he said.

“We think they were on their way to launch the attack,’’ said Hameed. “They told us that Americans are responsible for the death of every innocent Muslim in the so-called war on terror.’’

Police seized 26 hand grenades and five detonators from the militants, who were traveling by car and motorcycle, said Hameed. Despite their intentions, the men did not know for certain whether any Americans were staying at the hotel, he said.

The Pakistani Taliban have taken responsibility for a series of terrorist attacks in Pakistan.

A Taliban suicide bomber struck the Pearl Continental chain’s hotel in the northwestern city of Peshawar in June, killing nine people. The Taliban also claimed responsibility for an attack on the Sri Lankan cricket team in Lahore earlier that year. And in 2008, a suicide truck attack against the Marriott Hotel in Islamabad killed more than 50 people.

Yesterday, gunmen attacked a vehicle carrying a former government minister just outside the capital, killing at least three of his aides.

He had just finished giving a campaign speech for a vacant Parliament seat.

The former minister hurt his leg as he fell out of the vehicle, said Ahmad’s spokesman, Javed Qureshi.

Ahmad served as information minister under former president Pervez Musharraf but lost his seat in the election held in early 2008.

Investigators said it was too early to know who was responsible for the attack, but many of his supporters said it was politically motivated.

As Ahmad was taken to the hospital, hundreds of his supporters took to the streets in heavy rain and demonstrated against the Pakistan Muslim League-N, a rival political party headed by Nawaz Sharif.

Ahmad is a candidate for a seat in the National Assembly in an election scheduled for Feb. 24.

Ahmad has angered Pakistani militants in recent years because of his strong support for Musharraf and the country’s counterterrorism operations in the northwest.

Over the weekend, Pakistani security forces seized Damadola, a key Taliban stronghold in the northwest the government had declared free of militants a year ago.

Damadola, a region made up of about a dozen villages, contained militant hide-outs, training centers, tunnels, and concrete bunkers, officials said.

The United States has welcomed Pakistan’s operations against militants waging war against the country but has also urged the government to take on others who are launching cross-border attacks against US and NATO troops in Afghanistan. Pakistan has resisted, saying its troops have enough to handle.

Rawalpindi has been the site of several other attacks on politicians, including the 2007 assassination of former prime minister Benazir Bhutto.