25 years on, wounds in Bhopal linger 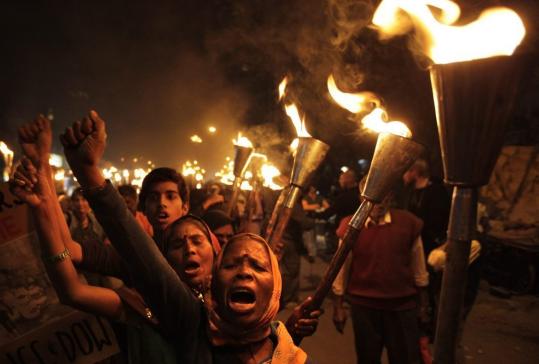 NEW DELHI - Bhopal residents are still angry with Union Carbide, owner of the chemical plant that 25 years ago today released a poisonous gas cloud that killed more than 15,000 people and injured hundreds of thousands more in what’s been termed the world’s worst industrial accident.

Residents are also angry at , which acquired Union Carbide in 2001 and washed its hands of any inherited responsibility.

And many are at least as angry with the Indian government, which settled for what they say was a ridiculously low sum and has since failed to care for its people.

“We drink poison every day, even as our government keeps promising us clean water,’’ said Hazara, 46, who uses only one name. “Union Carbide has been sold to Dow, and now the central government is sitting in their laps without concern for us.’’

Over the years, “Bhopal’’ has become shorthand for corporate irresponsibility, fueling debates over multinational morality, the environment, and codes of conduct.

In a bid to keep the memory of Bhopal alive, Madhya Pradesh, the state where the rusting factory is located, has suggested turning the site into a museum like those in Hiroshima and Chernobyl.

The idea has drawn criticism from residents, who say the area should be cleaned up and victims’ needs addressed first.

“Rather than invest in a museum, they should invest in the living,’’ said D. K. Satpathy, recently retired director of Bhopal’s Medico Legal Institute, which chronicled victim suffering.

Union Carbide agreed in 1989 to a $470 million out-of-court settlement with the Indian government, absolving it of future liability. The figure translates to about $500 for many victims and survivors. Tens of thousands of others who were unable to navigate the registration process received nothing, critics say.

“It’s like we are beggars, and they are paying us alms,’’ said Hazara, who said her $500 was depleted within months, leaving her to nurse several sick family members suffering from chronic fatigue and vision problems. “What do we have to do to get justice?’’

Residents have called for Michigan-based Dow Chemical to mount a thorough cleanup. They say the 350 tons of toxic waste in and around the plant continues to kill crops; pollute groundwater; and cause cancer, birth defects, neurological damage, chaotic menstrual cycles, and mental illness.

A report released this week by Bhopal Medical Appeal, an advocacy group, said local groundwater tested in June contained 2,400 times the recommended safe levels of carbon tetrachloride, a known carcinogen banned from consumer products in the United States in the 1970s.

Dow says it never operated the Bhopal plant and bears no responsibility; Union Carbide said on its website that the accident was a terrible tragedy, but that it met its obligations.