But more girls are refusing to wed so young 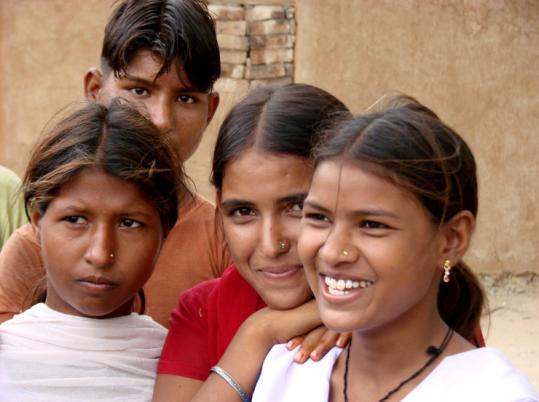 Roshan Bairwa, in red, refused to be married at age 14. With the encouragement of a charity, she and other young women perform skits that encourage girls to safeguard their future. (Mark Magnier/Los Angeles Times)
By Mark Magnier Los Angeles Times / November 27, 2009

MOHAMMAD NAGAR DHANI, India - Her fate was all but sealed, the wedding bells ringing in her relatives’ heads. Then the bride-to-be, a little girl playing in the dirt in this impoverished village, plucked up her courage and said, “I do not.’’

Roshan Bairwa, then 14, joined a growing number of girls defying the centuries-old tradition of child marriage in a country where nearly half of all women are married before their 18th birthday.

The British raj tried to stamp it out. Mohandas Gandhi, himself a child groom, campaigned against it. The United Nations has condemned it. And in 2006, the Indian government explicitly banned it.

But child marriage remains pervasive in India, accounting for one-third of such unions worldwide and underscoring the contradictions and complexities of a society that produces cutting-edge engineers even as it clings to feudal traditions.

“These girls are very brave,’’ said Sarita Singh, secretary of the Rajasthan state Department of Child and Women Development. “There are enormous social forces working against them.’’

All she knows is the dread she felt three years ago when her grandmother told her matter-of-factly that some people were coming to finalize her wedding arrangements in a ceremony known as a saadibiba, a traditional meeting of future in-laws.

“If I married, the doors would close,’’ Roshan, now 17, said as she perched on a charpai, a string cot.

It wasn’t that hard to convince her grandparents, who helped raise her after her father died when she was 3 and her mother abandoned her. But her aunt and uncle, who had found the boy groom in a village 30 miles away, were another matter.

Roshan said they viewed her early marriage as only proper - and also realized it would mean one less mouth to feed. The battle lasted a good two weeks, with several meetings and much yelling. Eventually they were brought around by the promise that she might receive a government wedding subsidy if she waited until she was 18.

“I was scared when I thought about refusing, but very relieved after I did,’’ said Roshan, now in the 10th grade. “I want to study, which wouldn’t happen if I married young.’’

With the encouragement of Shiv Shiksha Samiti, a charity that promotes women’s rights and social development, Roshan and 22 other girls meet and perform skits that encourage girls to safeguard their future. And when they hear about girls being pushed to marry, they lobby the parents to delay the wedding.

The group said eight child marriages in a 25-village radius have been shelved recently. Although that’s a fraction of the 150 that went ahead, it’s a big break with the past. Increasingly, those who resist are gaining notice.

A few months ago, Rekha Kalindi, a 14-year-old from northeast Bihar state, was invited to meet Pratibha Patil, India’s first female president, after Kalindi refused to be married.

“They become little agents of change,’’ said Sarah Crowe, spokeswoman for UNICEF in New Delhi, “although the numbers are still shockingly high.’’

The physical costs of underage marriage are enormous: Mothers who have babies before they’re 15 are five times more likely to die in childbirth than those in their 20s.

Then there’s the emotional toll. At the Women’s Hospital in Jaipur, in Rajasthan, a crowd of young women gather in the women’s wing, a riot of red, orange, and pink saris elbowing to see a doctor in a region where women’s health care is limited.

“They’re often not psychologically prepared to be mothers because they’re children themselves,’’ said Adarsh Bhargav, head of the gynecology department. “Many are irritated by their newborn’s crying. There’s no attachment.’’

The best way to raise marriage ages, activists said, is education. But most girls in rural areas must travel some distance to attend middle school, and their parents often hold them back, fearful their daughters could be raped, sexually harassed, or simply heckled, which can be enough for a groom’s family to break off the engagement and ruin her reputation.

The 2006 law sets the legal age for marriage as 18 for women and 21 for men, explicitly prohibits child marriage, and provides for punishment of adults who arrange them and for annulment of such unions. But the law has had limited impact, women’s rights group say.

A few miles from Roshan’s village, 45-year-old farmer Ramdev is pleased, having recently married off his daughter, Manisha. She’s 8, now betrothed to a 10-year-old. It will be a few years before she moves into her husband’s house, a ceremony called the gauna, but her parents have already restricted her movement and limited her play time.

“I know the government says we should marry at 18,’’ Ramdev, who uses one name, said as a camel pulled a cart slowly past their dirt house. “But even at 12 or 15, it’s difficult to keep a girl’s honor. And by 18, if unmarried, they get crazy thoughts.’’