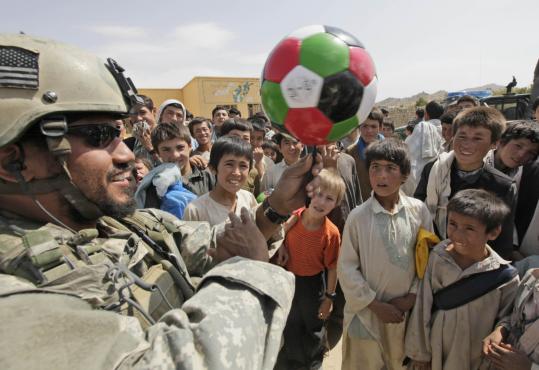 A Special Forces soldier entertained children at a school in Nili by spinning a soccer ball on a pen. The soldiers bring gifts to all the villages they visit, but have local officials distribute them. (Alex Brandon/Associated Press)
By Kevin Maurer Associated Press / September 27, 2009

NILI, Afghanistan - The soldiers hesitated as the mullah preached, unsure whether they would be welcome at the celebration of one of Islam’s highest holidays.

But when the sermon ended, the Afghans draped bright scarves over the soldiers’ tanned necks. Then they pushed Chief Warrant Officer Chaka, a Puerto Rican with a thick black beard and a deep tan who could easily pass for Afghan, up front to speak. Chaka thanked the elders and showed them his hands stained orange for the Eid celebration.

“This is our home away from home,’’ said Chaka. “We wanted to come over and be with our neighbors.’’ Special Forces soldiers, who all have beards to blend in with Afghan culture, are identified only by their first names, under rules for journalists embedded with them.

The Eid event showed how a dozen Special Force soldiers have joined in the daily life of the town’s 95,000 residents since they moved in a month ago.

The team is among only a few US troops to live in the midst of Afghans, but there will likely be more. The hope is to push Special Forces teams into villages, giving them the mission of rebuilding and training Afghan police and soldiers.

For its part, the village of Nili, the provincial capital of Day Kundi in central Afghanistan, had built a living compound in hopes of attracting Western aid workers. It stood empty for two years, until Day Kundi’s governor lobbied international forces for help. The request dovetailed with a plan by the top commander in Afghanistan, US General Stanley McChrystal, to forge closer ties between the US military and Afghans.

“We are enthusiastic about this initiative and believe that it will go a long way to increasing security and enabling villagers to defend themselves,’’ said Colonel James E. Kraft, commander of the 7th Special Forces Group. “Everyday we are here, we are making our Afghan partners better. In the final analysis, the onus of security in Afghanistan will rest with its security forces.’’

Day Kundi is one of Afghanistan’s most peaceful regions, dominated by ethnic Hazaras with long-standing grievances against the mostly Pashtun Taliban. Nili sits in a valley surrounded by towering peaks. Between the biscuit colored compounds and houses that make up the town are acres of almond trees, which the locals harvest. There is little industry and the province exports next to nothing.

Day Kundi is a perfect testing ground in many ways, because it is so peaceful and progressive - it is home to one of Afghanistan’s few female mayors - and so poor. Overlooked by development projects and the military alike, its streets are dirt, its schools are in shambles, and it faces a shortage of water for crops. With winter fast approaching, any building projects will be difficult to complete until spring when the passes are clear.

The Special Forces soldiers spend their days meeting with local leaders, visiting schools, and helping the doctors at the province’s two hospitals. Everywhere they go, they bring soccer balls and backpacks for the children and radios and food for the adults. They never give out aid directly, relying instead on the elders or Afghan police.

“These guys have to learn how to do this,’’ said Captain Mark, a former enlisted Green Beret whose deep blue eyes draw immediate notice among Afghans. “That way when we are gone, the ideals are already in place.’’

Last week, they surveyed a school south of Nili that was nothing more than a collection of torn white tents tacked into the mountainside. Dusty, threadbare rugs covered the dirt floors and there were no desks or school supplies for the 400 students.

“It has been nine years that these students have worked out of these tents,’’ said Khanali, the school’s principal, who like many Afghans goes by one name.

Mark urged Khanali to get him plans for the new school so that he could send up a proposal for funding.

After a month, the Afghans are anxious for some of the building projects to start. Chief Mortaza, the provincial police chief, said all people want is for the team to start fixing the schools and the mosque. But the team is still in the assessment phase and trying to target the best projects.

Since its creation, Special Forces have trained foreign armies and toppled the Taliban by mentoring Northern Alliance fighters. But in the almost nine years since, Coalition units have focused much of their resources on raids. Mark, the team commander, said thousands of soldiers are attacking the “branches’’ of the insurgency, but only living among Afghans will get to the root of the problem. “We lost our way, but have found it again,’’ he said.