US soldier held in contractor’s slaying in Iraq

Reporter who threw shoes at Bush to be freed 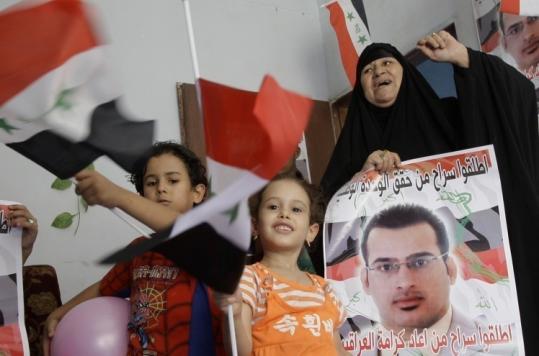 BAGHDAD - A US soldier was arrested in connection with the fatal shooting yesterday of a civilian contractor on an American military base in the northern Iraq city of Tikrit, the military said.

The military did not release the nationality of the victim. Houston-based KBR, however, confirmed that he was one of its employees, 27-year-old Lucas Vinson. The company declined to comment further

The US military makes wide use of contractors in Iraq for security, technical support, and supply functions. KBR is the primary support contractor in Iraq, providing troops with essential services, including housing, meals, and mail delivery.

As of the end of June, 1,395 civilian employees of US government contractors had been killed in Iraq, according to an Associated Press count.

Elsewhere in northern Iraq, a Kurdish woman and her three children were found shot to death in their home yesterday morning in Banja, a small community near Kirkuk. It was unclear whether the shootings were linked to criminal activity or to Arab-Kurdish tensions.

A neighbor, Mohammed Qadir, said he had called the police because he was nervous for the family after they had been left alone by the woman’s husband, a policeman, who had to work overnight. The husband sat crying in front of his home yesterday. He said he had returned from work in the morning, shortly before the police arrived, and discovered the bodies.

“I was astonished when I found my family, my wife and three children, were killed while they were in their bed,’’ said Amid Abdul Rahman, who fell silent for a moment. Then he waved his hand and shouted: “Oh my God, may you take revenge on the killers. . . . What is the guilt of my son, Mohammed? And he is an infant! What is the guilt of my small daughters?’’

In Baghdad, the family of the Iraqi journalist who threw his shoes at President George W. Bush is preparing a festive welcome for his release from prison today after nine months behind bars. At his family’s home, relatives of Muntadhar al-Zeidi were already celebrating yesterday, waving Iraqi flags and hanging balloons and posters of the reporter on the walls.

Zeidi, a little-known reporter for a small Iraqi TV station, became an icon for many in the Arab world in a single moment in December. As Bush and Iraq’s prime minister addressed a news conference, the reporter jumped from his seat and hurled his shoes at the American president.

Bush was unhurt but forced to duck. Zeidi shouted at him in Arabic: “This is your farewell kiss, you dog! This is from the widows, the orphans, and those who were killed in Iraq.’’