2 more US troops killed in deadliest month of Afghan war

In July, death toll for foreign forces reached at least 71 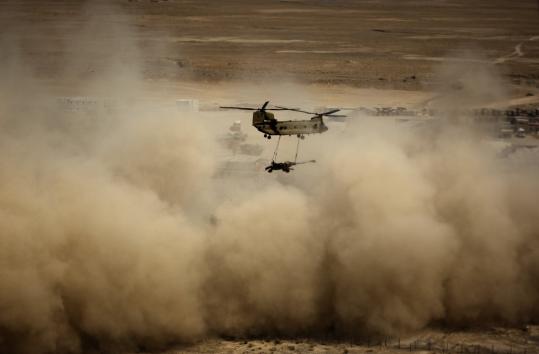 A US Chinook helicopter carried a howitzer as it landed yesterday on a base on the outskirts of Spin Boldak, 63 miles southeast of Kabul, Afghanistan. Two US service members were killed as the deadliest month for foreign forces in the Afghanistan war drew to a close, the military said yesterday. (Emilio Morenatti/Associated Press)
By Paul Tait Reuters / August 1, 2009

KABUL, Afghanistan - Two US troops were killed as the deadliest month for foreign forces of the Afghanistan war drew to a close, the military said yesterday, with commanders vowing to continue the fight despite the toll.

The deaths in southern Afghanistan brought to 41 the number of US troops killed in July, by far the heaviest monthly toll in the eight-year war. The worst previous month for US forces was September 2008, when 26 were killed.

The latest deaths occurred in a firefight with insurgents in southern Afghanistan on Thursday, the US military said. At least 71 foreign troops have been killed in July.

Britain has suffered its worst battlefield casualties since the 1980s Falklands War, with 22 service members killed in the month, taking its total losses in Afghanistan to 191, 12 more than were killed in the Iraq war.

Casualties spiked after thousands of US and British troops this month launched major operations in southern Helmand Province, a Taliban stronghold and the center of Afghanistan’s opium production.

“We understood the return of security to these areas would not be achieved without sacrifice,’’ US Rear Admiral Greg Smith, chief spokesman for US and NATO forces in Afghanistan, said. “For some that has come at a high price.’’

The Helmand operations are the first under President Obama’s new regional strategy to defeat the Taliban and their Islamist militant allies and stabilize Afghanistan. They are occurring before crucial presidential elections on Aug. 20.

Violence has escalated across Afghanistan since the operations were launched.

There has also been a spate of election-related attacks, with at least three candidates or officials, including President Hamid Karzai’s vice presidential running mate, Mohammad Qasim Fahim, ambushed. No candidates have been hurt.

The Helmand operations are the first phase of a new “clear, hold, and build’’ strategy introduced after criticism that previous strategies lacked cohesion and direction. Overstretched NATO forces had previously been unable to hold ground they won.

The extra troops include 4,000 meant to help train Afghan security forces and will be followed by a “civilian surge’’ of several hundred to assist in rebuilding institutions shattered by decades of war.

General Stanley McChrystal, the new commander of US and NATO forces in Afghanistan, has also introduced a counterinsurgency strategy and issued a new tactical directive, which includes limiting the use of air strikes, hoping to reduce the number of civilian casualties in the war.

Civilian deaths have outraged many Afghans and caused friction between Washington and Karzai’s government. A UN report released in Geneva yesterday found that 1,013 civilians had been killed between January and June, up from 818 in the same period last year, as the battlefield increasingly moved into residential areas.

The deaths were largely caused by air strikes, car bombs, and suicide attacks, with the Taliban blamed for 59 percent of the fatalities, the United Nations mission in Afghanistan said.

“All parties involved in this conflict should take all measures to protect civilians and to ensure the independent investigation of all civilian casualties, as well as justice and remedies for the victims,’’ said Navi Pillay, UN high commissioner for human rights.

Six civilians were killed or wounded by a roadside bomb in Jawzjan Province on Thursday, the Interior Ministry said.