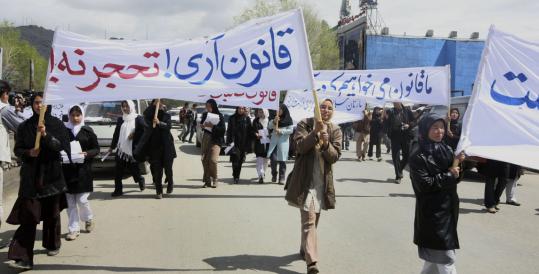 Afghan Shi’ite women marched in April to protest a law that, among other things, said they need their husbands’ permission to leave the house and must be ready for sex every four days. (Musadeq Sadeq/ Associated Press)
By Heidi Vogt Associated Press / July 14, 2009
Text size – +

President Hamid Karzai signed the law in March but quickly suspended enforcement after governments around the world condemned it.

Though the law applied only to minority Shi’ites, critics saw it as a return to Taliban-style oppression of women by a government that was supposed to be promoting democracy and human rights.

The changes, which are not yet approved by Parliament, would delete sections that said a woman needs her husband’s permission to leave the house and must be ready for sex at least every four days. In a letter to the president, activists said other parts would change so little that the law is still unacceptable.

Issues such as polygamy and a woman’s right to work and to refuse sex have been addressed only with “slight changes in the wordings of the law, rather than changes in content,’’ the letter states.

The section about submitting to sex every four days was deleted, but other sections let a husband order sex, said Shinkai Kharokhel, a lawmaker involved in attempts to change the legislation.

A section explaining a husband must provide financially for his wife also says he can withhold support if she refuses to “submit to her husband’s reasonable sexual enjoyment,’’ according to Human Rights Watch.

That’s equivalent to saying a husband can starve his wife if she refuses to have sex, Kharokhel said.

Most Afghan women “are illiterate and they don’t have financial security and no one will give her money . . . shelter, medical, food, all these expenses belong to the man, and he can hold that back,’’ she said.

The revised law would also restrict a woman’s right to leave the house and to work, she said.

Even so, Kharokhel said, deletion of some of the most controversial articles showed the government was trying to address women’s rights.

She said she hopes there will be further revisions proposed.

It is a view seconded by other activists. Wazhma Frogh, who works with a human rights group called Global Rights and was one of the drafters of the letter, said the proposed deletions of some restrictions “shows their support for women’s rights issues.’’

Frogh said the letter was agreed to by more than 50 civil society groups, though no group signed it by name.

She said signatures were not omitted out of fear, but with the idea that the missive should be seen as representing Afghan women, rather than a few groups in Kabul.