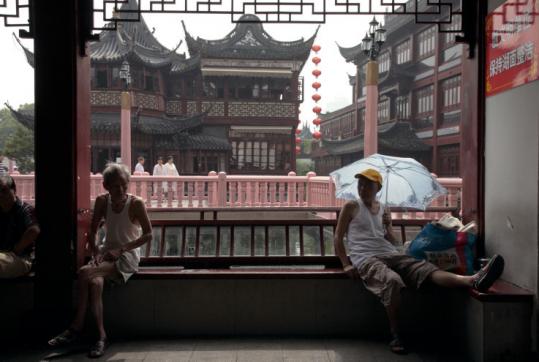 Elderly men sat on a bench at Yu Garden in Shanghai. The city provides a window into China’s demographic future, as more than one-fifth of its population is at least 60 years old. (Kevin Lee/Bloomberg)
By David Pierson Los Angeles Times / July 12, 2009
Text size – +

But a social experiment that worked well in some respects is now threatening the country’s hard-won gains. China’s working-age population - the engine behind its prolific growth - will start shrinking within a few years.

Meanwhile, the ranks of elderly are projected to soar. By the middle of this century, fully a third of China’s population will be age 60 or older, compared with 26 percent in the United States. China’s projected 438 million senior citizens will outnumber the entire US population.

With fewer workers to support an aging society in need of care, China faces the same demographic squeeze confronting Western nations. The difference: China’s family-tinkering policy has accelerated a shift that the country is ill-prepared to manage and finance.

“The problem is the age wave is coming while China is still relatively poor,’’ said Richard Jackson of the Washington-based Center for Strategic and International Studies. “China may be the first major country to grow old before it grows rich.’’

Advances in family planning, nutrition, and healthcare have resulted in longer life spans and fewer babies across much of the globe. The populations of developing regions such as Latin America and Asia are still much younger than those of US and European societies. But they’re aging much more quickly, lacking the time and resources to stitch together old-age social safety nets on par with those of rich, industrialized nations.

Shanghai provides a window into China’s demographic future. Already China’s largest city, it’s also its grayest. More than one-fifth of its population is at least 60 years old. That percentage is projected to nearly double to 40 percent by 2030.

Seniors crowd public parks to do tai chi exercises in the morning and play checkers in the afternoon. They natter with one another on city buses, where everyone 70 and older rides free.

So many residents have reached retirement age that city officials are urging local companies to persuade their aging staffs to stay on the job longer. The government has injected $618 million into the public pension system over the past two years to keep it solvent.

Lu Yiwen, a 45-year-old factory technician in Shanghai, is years from retirement. But she’s already anxious about her dotage.

“I’m not sure what we’re going to do when my husband and I get old,’’ she said. “We have one son, and we just hope he can take care of us. Maybe he’ll have his own business. But it’s a lot of pressure for one child.’’

Despite its dazzling economic growth, China is still a low-income country. Its per capita GDP in 2008 was just over $5,000, one-ninth that of the United States. Only about a third of China’s workforce is covered by a pension system; most of those covered are urbanites. Families save copiously, but it’s rarely enough to support them through old age. Average life expectancy is 73 years - up 32 years since the People’s Republic was founded in 1949.

For most Chinese, social security still means relying on extended family. But that bond is being strained by low birthrates and the migration of tens of millions of young people from the country to jobs in far-off manufacturing plants.

When the retirement center at 2 Ruijin Road opened 15 years ago, the thought of packing loved ones off to an old-age facility was still taboo.

“If you sent your parents to a home, people would accuse you of treating them badly,’’ said Li Hong Mei, the center’s chief physician. “Parents would just refuse to go.’’

To ward off social catastrophe, China’s central government has pledged to introduce a national pension system. The challenge will be crafting a plan that is generous enough to keep seniors from poverty but doesn’t unduly burden the young. Today in China there are 5.4 working-age adults for every elderly person, according to the Center for Strategic and International Studies. That ratio will plummet to 2.5 by 2030 and to 1.6 by 2050.