Taliban on the run, for now 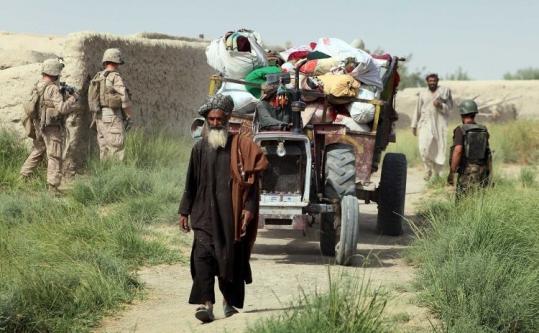 CAMP LEATHERNECK, Afghanistan - US Marines trapped Taliban fighters in a residential compound and persuaded the insurgents to allow women and children to leave. The troops then moved in - only to discover that the militants had slipped out, dressed in women’s burqa robes.

The fighters, who may owe their lives to the new US commander’s emphasis on limiting civilian casualties, were among hundreds of militants who have fled the offensive the Marines launched last week in southern Helmand Province. Marine officers say keeping the Taliban from returning so the Afghan government can establish a stable presence will be a bigger challenge.

“We have dislocated them while still protecting the people,’’ said Colonel Eric Mellinger, the operations officer for the Second Marine Expeditionary Brigade. “Now the key is to prevent militants from coming back in, and the way to do that is to earn their [Afghan villagers’] trust so that they don’t allow them to come back in.’’

The offensive, which began Thursday when about 4,000 Marines and sailors stormed into the Helmand River valley, seeks to cut off a major Taliban supply route. The militants bring in weapons and fighters from Pakistan and ship out opium - one of their main sources of income.

Before the operation, their biggest of the Afghan war, Marine commanders believed up to 1,000 insurgents were operating in the fertile valley. But most of them fled without a major battle, instead launching scattered but ineffective attacks.

As a result, only one Marine has died so far in the mission, although several have been wounded. Others have collapsed from heat exhaustion after hiking for days with 50 to 100 pounds of food, water, weapons, and ammunition in temperatures approaching 120 degrees Fahrenheit.

Militants seemed keen to avoid an all-out fight with the better armed Marines.

On Monday, images from a Predator drone showed a dozen fighters and at least 15 to 20 civilians inside a mud-brick compound in the village of Khan Neshin, about 60 miles north of the Pakistani border.

Because of the civilians, the US troops held their fire, and instead used a military translator and village elder to persuade the militants to free women and children.

Two groups - children and what appeared to be women in burqas - left the compound. When the Marines entered, they found no one. The fighters had clearly donned burqas and slipped away among the civilians, according to Marines who took part in the mission.

The Americans didn’t have female Marines with them to search the robed figures and make sure no men were among them in disguise. And the new US and NATO commander, General Stanley McChrystal, has said he would rather see militants escape than for civilians to be harmed in battle; a declassified version of his new guidelines for troops was released Monday.

For years, Helmand has proved to be one of the toughest regions to tame. Some 8,000 to 9,000 British troops have been in Helmand since 2006, but the force has been too small to control the militant-infested province about 325 miles southwest of Kabul.