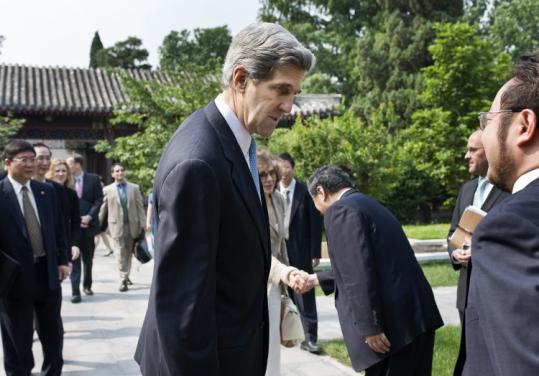 Senator John F. Kerry and his wife, Teresa Heinz (back), were greeted by Chinese officials earlier in the week in Beijing. (Andy Wong-Pool/Getty Images)
Staff And Reuters / May 29, 2009
Text size – +

As the new chairman of the Foreign Relations Committee, Kerry has made global warming a priority, and his office said that China's leaders have indicated they will begin immediate bilateral negotiations on clean energy technologies and possibly more substantive discussions on global warming before the December summit in Copenhagen.

Congress is working on its own climate change bill that would create a new cap-and-trade system to limit emissions of pollution blamed for global warming through the granting and sale of pollution credits.

"China recognizes the need to address climate change as a critical component of the nation's economic development and national security strategy," Kerry said at a Beijing news conference. "If the United States and China - which together produce almost half of global emissions - can demonstrate concrete progress in the weeks ahead, we will lay the foundation for success at Copenhagen and beyond."

House Speaker Nancy Pelosi and key House legislators on the energy bill are also touring China and have met with Prime Minister Wen Jiabao and President Hu Jintao. Representative Edward Markey, a Massachusetts Democrat who along with Henry Waxman pushed a bill through committee last week, also sounded a note of optimism. "We leave here encouraged that progress can be made heading towards Copenhagen," Markey told a news conference in Beijing.

But James Sensenbrenner, a Wisconsin Republican on the trip, was less optimistic. "The message that I received was that China was going to do it their way regardless of what the rest of the world negotiates in Copenhagen."