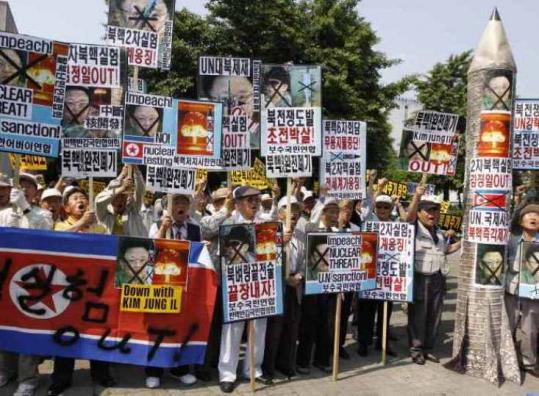 UNITED NATIONS - The Security Council yesterday swiftly condemned North Korea's nuclear test as "a clear violation" of a 2006 resolution and said it will start work immediately on another one that could result in new sanctions against the reclusive nation.

Hours after North Korea defiantly conducted its second test, its closest allies China and Russia joined Western powers and representatives from the rest of the world on the council to voice strong opposition to the underground explosion.

After a brief emergency meeting held at Japan's request, the council demanded that North Korea abide by two previous resolutions, which among other things called for Pyongyang to abandon all nuclear weapons and return to six-party talks aimed at eliminating its nuclear program.

It also called on all other UN member states to abide by sanctions imposed on the North, including embargoes on arms and material that could be used in its nuclear and ballistic missile programs and ship searches for banned weapons.

In an interview in Copenhagen, Secretary General Ban Ki-moon deplored the test as a "grave violation" of council resolutions and called on the council in a statement to send "a strong and unified message" aimed at achieving the denuclearization of the Korean peninsula and peace and security in the region.

Ban urged the North "to refrain from taking any actions which will deteriorate the situation."

Leaders in the United States, European Union, and Russia also offered quick and pointed criticism. Even China's foreign ministry joined the chorus of disapproval, saying it "resolutely opposed" the test.

In Brussels, the EU's foreign policy chief, Javier Solana, denounced the test as a flagrant violation of Security Council resolutions.

Russia's UN Ambassador Vitaly Churkin, the current Security Council president, made clear in a statement that the council's condemnation was only an initial response, and that more will follow. He said it was too early to give any specifics.

US Ambassador Susan Rice said the 15-member council agreed that work on the new resolution will begin Tuesday.

"What we heard today was swift, clear, unequivocal condemnation and opposition to what occurred," she said.

France's deputy UN ambassador Jean-Pierre Lacroix said France wants the new resolution to "include new sanctions . . . because this behavior must have a cost and a price to pay."

Japan's UN ambassador, Yukio Takasu, a non-permanent council member, said his country was pleased that the rest of the council agreed there should be a new resolution. But he noted that sanctions imposed against three North Korean companies after Pyongyang's missile test in April obviously had no effect.

"So therefore I think we really have to think very carefully what will be an effective way to deal with this kind of behavior," he said. "We have to do something more, and the question is what is more."

Churkin was asked whether Russia viewed the nuclear test as more serious than the North's launch of a missile in April.

"This is a very rare occurrence as you know, and it goes contrary not only to resolutions of the Security Council but also the [Nuclear] Nonproliferation Treaty and the [Nuclear] Test Ban Treaty," he replied. "We are one of the founding fathers - Russia is - of those documents, so we think they're extremely important in current international relations. So anything which would undermine the regimes of those two treaties is very serious and needs to have a strong response."