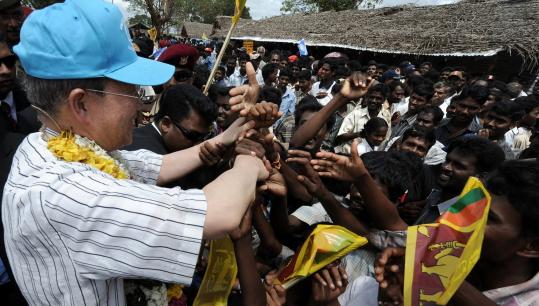 COLOMBO, Sri Lanka - Every 15 minutes, Sri Lankan state television halts its normal programming to broadcast patriotic images of women in lush tea fields at sunrise, workers building power lines, and troops standing guard, all accompanied by a soaring anthem in which a young beauty calls for the country's president to be crowned king.

On the streets of the capital, billboards proclaim, "King Mahinda Rajapaksa: He saved us" beneath a photograph of the president hugging his brother Gotabhaya Rajapaksa, Sri Lanka's defense minister, and apparently glorying in the military victory that last week ended a quarter-century of war with the Tamil Tiger separatists.

"Everyone's heartbeat is just like my song and the billboards," said Saheli Rochana Gamage, 21, whose rendition of the anthem has made her a celebrity in this small Indian Ocean island nation. "He should be our president forever. We are happy with a king who can protect our country. Elections don't matter."

At a time when insurgencies elsewhere seem to be expanding, notably in Afghanistan, the Rajapaksa brothers were able to do what five Sri Lankan presidents, eight governments, and more than 10 cease-fires could not: win a war against a movement that the FBI has called "the most ruthless and efficient terror organization in the world."

Despite the elation, the human cost of their accomplishment is also becoming clear: Power has been consolidated around a ruling family, a humanitarian crisis looms, and civil rights and media freedoms have been rolled back.

Perhaps the most pressing problem is the situation of more than 280,000 people, mostly Tamils, who have been driven from their homes in recent months, many of them traumatized women and children who were used as human shields or forced to huddle in trenches or the jungle during fighting. They are now living in overcrowded, highly controlled government-run camps, fenced in by barbed wire. Sri Lanka stands at a crossroads, many here say.

"Sri Lanka has won the war. But now they have to win the peace, which is a very difficult challenge," said Erik Solheim, Norway's minister for international development, who worked for 10 years with the warring parties and brokered a failed cease-fire in 2002. The government must make all communities feel they are Sri Lankans, he said.

"They also have to share local power in the north where many of the Tamils live," Solheim added. "The president will have to rise to the occasion.

Yesterday, UN Secretary General Ban Ki-moon toured Sri Lanka's biggest refugee camp and said the country did not have the resources to deal with the tens of thousands who fled fighting with Tamil Tiger rebels.

Ban's trip was the highest-level international visit to Sri Lanka since the government declared victory over the Tamil Tiger rebels. He flew over the final battleground and met President Mahinda Rajapaksa.

Ban told Rajapaksa the United Nations and other humanitarian agencies needed immediate and unimpeded access to camps that are housing 290,000 people who escaped rebel-held areas as a military onslaught bore down on the separatists.

Human rights groups are concerned about a number of children allegedly abducted from the camps by progovernment Tamil paramilitary groups and questioned about links to the Tamil Tiger rebels, according to the Coalition to Stop the Use of Child Soldiers. The fate of many young Tamil Tiger fighters who surrendered is also unknown. The camps are closed to journalists and Tamil political leaders.

Lakshman Hulugalle, director general of the Defense Ministry's media center, declined to comment on the treatment of those accused of "terrorism" and defended sealing the camps.

After a spike in suicide bombings following the US-led invasion of Iraq in 2003, the Tigers reportedly carried out two-thirds of all such attacks in the world. India on Thursday marked the anniversary of the 1991 killing of Prime Minister Rajiv Gandhi by a suspected Tiger female suicide bomber, apparently in revenge for his sending a peacekeeping force to Sri Lanka.

Solheim said closing the camps to aid workers and journalists "for any reason is completely unacceptable and dangerous for those inside."

"The international community must, and I mean must, get into these camps," he said. "They have to say to Sri Lanka: 'It takes two to tango. If you want reconstruction and aid money, you will open the camps.' "

The United States and Britain, two key members of the International Monetary Fund, have said they will link the release of a $1.9 billion bailout loan to improvements in Sri Lanka's treatment of war-displaced civilians.

Material from Reuters was included in this report.