Shootout in Istanbul between police and militant kills 3 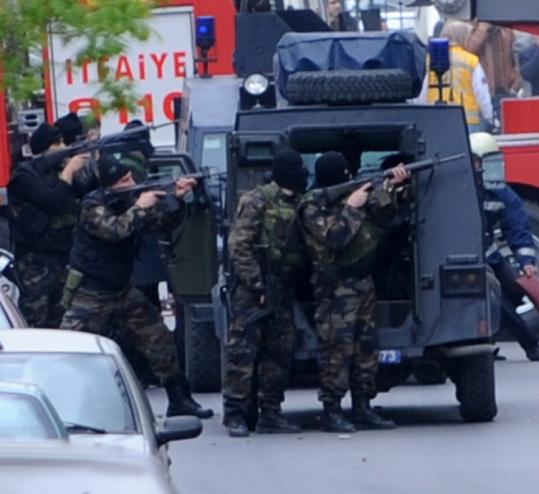 ISTANBUL - Three people were killed and at least seven were injured in a shootout between Turkish police and a militant in central Istanbul yesterday.

Turkey's interior minister, Besir Atalay, identified the assailant, Orhan Yilmazkaya, who was also killed, as a senior member of the Revolutionary Baracks Organization, a little-known group that he said was affiliated with the militant Kurdish group, the Kurdistan Worker's Party, or PKK.

Turkey has been fighting the Kurdish separatist group since the 1980s. The group says it is fighting on behalf of Turkey's oppressed Kurdish population. Turkey says that giving Kurds more rights will encourage a movement to secede. It was not clear how the Revolutionary Baracks Organization was related to the PKK.

The battle began yesterday morning, during raids the police were conducting across Istanbul. In the Bostanci neighborhood, Yilmazkaya refused to surrender, and began firing on police.

A police chief, Semih Balaban, and a civilian standing outside the security cordon, Mazlum eker, were killed, Atalay said. Seven policemen were injured. A cameraman for NTV, Turkey's biggest private television station, was shot in the ear, though he survived.

"There was information that this terror organization was planning sensational attacks in the following days," Atalay said at a press conference. " checks were completed. So, yesterday night, it was a serious operation."

Reuters cited Muammer Guler, governor of Istanbul, as saying that the militants belonged to leftist and Islamist radical groups.