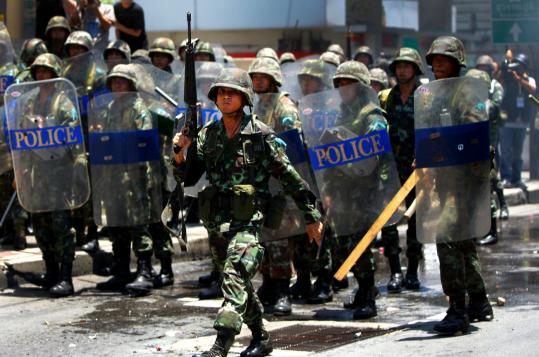 BANGKOK - Soldiers armed with assault rifles fought running street battles with anti-government protesters yesterday as unrest spread through a wider swath of the Thai capital and the chief of the country's armed forces vowed to use "every means to end the chaos."

Two people were killed and more than 113 people injured in yesterday's clashes, according to hospital officials. Included among the wounded were 23 security officers and other government personnel.

Major shopping malls shut their doors, foreign governments advised their citizens in Bangkok to stay inside, and the government banned the sale of gasoline in the center of the city in an effort to stop protesters from making Molotov cocktails.

"We will not use weapons unless it is necessary to defend ourselves," said General Songkitti Jaggabatara, the supreme commander of Thailand's armed forces. "We will not use them excessively."

By late evening security forces had cleared most major intersections and the protestors were facing off against army and police units in the streets around the prime minister's office. Also in the area were hundreds of pro-government vigilantes armed with machetes and clubs.

In a separate clash earlier yesterday at a major intersection, soldiers fired shots from automatic rifles and tear gas at the protesters, who answered with gasoline bombs. The gunfire appeared to be aimed above the protesters, but hospitals reported more than 70 injured, many from tear gas, and some news reports said that two demonstrators and two soldiers had been wounded by bullets.

The violence came on what is normally a day of animated celebration, the Buddhist new year and water festival. Street parties and revelry continued in some Bangkok neighborhoods untouched by the strife but the center of the city remained tense and at least a dozen streets were barricaded by protesters, many of whom were armed with clubs and slingshots. By late afternoon, security forces had cleared most major intersections.

In a televised address, the prime minister, Abhisit Vejjajiva, sought to reassure the nation that the government was carrying out a "step-by-step process to restore order and stop the violence."

Some 23 government personnel, including security forces, were injured yesterday, four of them with gunshot wounds, Abhisit said. Among protesters, 47 were injured, he said.

The unrest pits security forces against protesters known as the Red Shirts who are linked to Thaksin Shinawatra, the prime minister ousted in a 2006 military coup. But there are fears that violence could spread if other groups become involved.

Thaksin, who is overseas and faces a two-year prison sentence on charges of abuse of power if he returns to Thailand, told CNN that the government was concealing "many" deaths in the clashes. "They even take the bodies on the military trucks and take them away," he said. The government did not immediately respond to the accusation.

The Red Shirts are defying the government's decree of a "Severe Emergency Situation," including a ban on blocking any traffic, imposed in Bangkok on Sunday, a day after protesters shut down a regional summit meeting.

They vow to continue their demonstrations, which have become increasingly violent, until Abhisit steps down. Abhisit's location has remained secret since Sunday when his motorcade was attacked and an aide was dragged out of his car by protesters and reportedly beaten.

After three years of political crisis, including the 2006 coup and a weeklong closure by protesters of Bangkok's two airports late last year, many business leaders had hoped for a period of calm under the government of Abhisit, who came to office in December.

But the prospect of continued instability and the images of soldiers and military vehicles on the streets of the capital over the past two days seem sure to further damage an economy already badly battered by the global financial crisis.

"This is definitely going to hurt Thailand for a long time," said Pornthip Hiranyakij, secretary general of the Tourism Council of Thailand, an industry association. "It's a matter of safety and security for people. What is happening on the streets of Bangkok right now is scary for many customers coming in."