Crew of hijacked ship back home in Ukraine

Tell of isolation in small cabin for four months 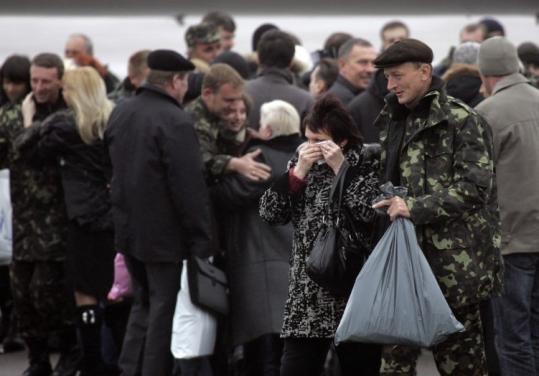 KIEV - Twenty joyful but exhausted sailors stepped off a plane and into the arms of their loved ones yesterday, a happy ending to an emotionally searing four-month hijack drama off the coast of Somalia.

Embracing sobbing wives and parents in the freezing cold outside Kiev's Boryspil Airport, the crew of the MV Faina - 17 Ukrainians, two Russians, and a Latvian - recounted how they were crammed into a tiny room, poorly fed, and haunted by the fear of never seeing their families again.

Somali pirates seized the Faina, laden with several dozen tanks and other heavy weapons, off the Horn of Africa on Sept. 25. The ship and crew were released only last week, after pirates sped off in skiffs with a $3.2 million ransom that had been dropped to the ship's deck by parachute.

Looking tired and frail, the crew members, said their diet consisted almost exclusively of rice or noodles only once or twice a day.

They spent most of their 18-week ordeal elbow-to-elbow in a small cabin, and were seldom allowed walks on the deck.

"They put us in a cage like this was a safari and nobody came to us, nobody talked to us," said Atrium Girzhev, a thin 22-year-old mechanic whose mother, Olga, had trembled with anxiety as she waited for him to disembark the plane.

Girzhev said the crew tried to keep their spirits up by reading the few books on the ship.

Olexandr Prisukha, 44, said the pirates treated them roughly for the first month or so, but then eased up after some crew members made progress learning Somali and helped the pirates recover when they fell ill.

"We wanted to live, and we survived," a smiling Prisukha said after embracing his wife, Olena, 41. "We're grateful to everyone who took part in our rescue." Still, he complained that the arms-laden ship was sent into dangerous waters with no military escort and no means of protection against pirates.

President Viktor Yushchenko of Ukraine joined family members who greeted the sailors, even though many relatives had accused him of ignoring their plight.

One life was lost. The Faina's Russian captain, Vladimir Kolobkov, died of a suspected heart attack shortly after the hijacking.

The sailors praised Viktor Nikolsky, who took over as acting captain. Nikolsky sought to lower the ransom demands and thereby hasten the crew's freedom by explaining to the pirates that the ship's military cargo was old, Prisukha said.

The seizure of the Faina raised fears that its cargo of 33 T-72 tanks and other weapons could fall into the hands of pirates or Al Qaeda-linked terrorists in the failed African state of Somalia.

With that in mind, US Navy warships quickly surrounded the Faina to stop any unloading of the weapons. Support vessels from Russia, China, Britain, France, Saudi Arabia, and South Korea soon arrived to help.