Many hopeless, fearful after terrorist attacks 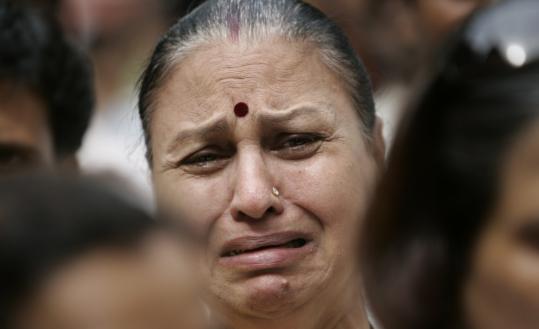 Mental health workers in Mumbai have been busy helping clients dealing with stress after last month's attacks that killed more than 170, though there is still a stigma about seeking help. (Lefteris Pitarakis/ Associated Press)
By Mark Magnier Los Angeles Times / December 25, 2008
Text size – +

But India, with 1.1 billion people, has only 4,000 psychiatrists, and efforts to provide adequate professional help for those traumatized by the rampage that left more than 170 dead and hundreds wounded is proving a daunting task.

Psychiatrists say it's not unusual to arrive at rural clinics and find 300 people waiting to see them. Each patient receives a scant few minutes of attention. Many give up and go in search of more traditional forms of assistance.

Evening "relaxation and breathing" workshops, for example, are being held in the immediate environs of the Chabad Jewish center that came under prolonged attack late last month and in other neighborhoods around Mumbai.

"We help ease people's tension through breathing techniques," said Ami Patel, an instructor with the Art of Living Foundation, which offers the sessions. "And people appreciate the feeling that someone cares."

Then there is traditional healer Laksham Meshram, 61, who sits cross-legged on a Mumbai sidewalk a few blocks from the bullet-pocked Taj Mahal Palace & Tower hotel and the Jewish center.

Stretched out before him are 90 bottles of roots, bark, and finely ground powder. The healer, who has been practicing his craft for 35 years, said people come to him for headaches and other problems, including some that may be psychosomatic. Even his potions may be no match for this crisis, he said, adding that there's no cure for raw terror.

"Death may be the only medicine for that," Meshram said.

Mental health professionals say they must battle deep-seated stigmas in some of the more traditional communities they serve, including the view that anyone who visits them must be "loony," even as they navigate the shoals of India's huge, diverse population.

Mumbai psychiatrist Anukant Mittal is a case in point. He shuttles among city hospitals, suburban clinics, and primitive rural facilities, all part of a catchment area of 26 million people.

On any given day, Mittal sees patients ranging from chief executives of high-tech multinationals, who pay $50 per visit, to illiterate villagers wearing nothing but strips of cloth over their loins, and pay a subsidized 5-cent fee.

Rural residents sometimes turn instead to a shaman for help.

"You know very well they're going to go from your clinic to a witch doctor who will do black magic," Mittal said. "So you have to say: 'I know you're going to need someone to exorcise this, but at the same time don't stop taking my medicine.' "

Treatment espoused by traditional practioners can be pretty brutal, doctors say, citing cases of mentally impaired patients being assaulted in a bid to beat the devil out of them. Yet it can be easier to tell your friends and family that a spirit invaded your body than to admit the problem may emanate from within your own mind.

Compared with more rural areas, India's financial capital is relatively well positioned to grapple with the psychological aftermath of this crisis. Mumbai is among the nation's wealthiest and most progressive cities, with more than 1,000 psychiatrists and psychologists.

"I'm lucky to work in Mumbai, a place where psychology is much more accepted than almost anywhere else in India," said Purvi Shah, a clinical psychologist with Mumbai's elite Dhirubhai Ambani International School, which lost several parents in the attack. "If you go to Varanasi or the North East, the idea of going to a shrink is unthinkable."

One huge benefit for India in overcoming the disaster is its tight-knit family structure, neighborhoods, and religious communities, which tend to provide much better grassroots support than is generally found in the more individualistic West.

Most of the symptoms mental health professionals are seeing, including people calling loved ones every few hours to make sure they're still alive and an inordinate fear of leaving the house, are normal for a population that has suffered such a harrowing shock.

The test will come in a few months, the professionals say, when some fail to revert to normal behavior.

One person likely to be tested is Hargovind Vaghela. The 11-year old in the flowing sari jumps whenever there's a loud noise. She screams in the night, has no appetite, and keeps reliving the sounds of gunfire and explosions when the bad men took over the house next door. They littered her house with bullet casings.

Many in the aftermath have looked for someone to blame, with elected officials in India and Pakistan high on the list.

While the anger may be justified, it is also a predictable response to trauma, specialists said.

"Any time you feel hopeless and vulnerable, you want someone to blame," said Lakshmi Vijayakumar, a psychiatrist and vice president of the International Association for Suicide Prevention.

Psychiatrists must grapple with their own anger, which can hamper their ability to help others. Recognizing this, hundreds of counseling professionals across India started an e-mail "anger discussion group."

"Psychiatrists are human, too, so we express our anger and try to heal ourselves," said Harish Shetty, a social psychiatrist with Mumbai's Hiranandani Hospital.

"It's not always politically correct to admit anger, but in our epics, the Ramayana and Mahabharata, good kills evil," Shetty said. "It's part of our ethos."