Raid not ruled out on Pakistan camps 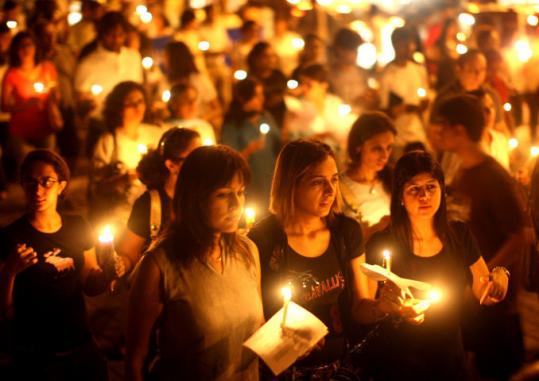 MUMBAI, India - The top domestic security official resigned in disgrace yesterday for the failure to thwart or quickly contain the horrific terrorist attacks in Mumbai last week, as the government announced a raft of measures to bolster antiterrorism efforts and struggled to calibrate a response to what it views as Pakistani complicity.

Top officials have suggested that groups based in Pakistan had some involvement in the attacks. The suspension of diplomatic relations and a cross-border raid against suspected militant training camps in Pakistan were not ruled out.

The security official, Shivraj Patil, the home security minister, became the first senior official in Prime Minister Manmohan Singh's administration to leave office over the Mumbai attacks, which have traumatized the nation for their ferocity and audacity and laid bare glaring deficiencies in India's intelligence and enforcement abilities. The pressures on the government are especially acute, with elections only six months away.

While Indian officials insisted publicly that the mayhem was carried out by 10 heavily armed men, there were new indications that others had been involved and that the attackers had at least some accomplices pre-positioned on the ground.

The three-day siege of Mumbai, the country's financial capital, ended Saturday with a death toll of at least 188, hundreds wounded, and two of Mumbai's most famous five-star hotels, the Taj Mahal Palace & Tower and the Oberoi, where most of the mayhem took place, partly in ruins. At least 28 of the dead were foreigners, including at least six Americans and eight Israelis killed at a Jewish religious center that had been seized by the attackers and was stormed by elite Indian commandos dropped from a helicopter.

Despite repeated assertions by Pakistan's government that it bore no responsibility, the attacks have raised the pitch of India-Pakistan tensions to their most dangerous level in years. Not since the December 2001 suicide attack on the Indian Parliament in New Delhi, which India blamed on Pakistani groups, have there been such blunt Indian accusations about outlaws based across the border; that episode prompted the two countries to send their armies to the border, sparking fears of war between the nuclear neighbors.

The Bush administration, hoping to help defuse the possibility of new hostilities, announced it was sending Secretary of State Condoleezza Rice to India this week "to stand in solidarity with the people of India as we all work together to hold these extremists accountable."

Yesterday, a senior government official said Singh's administration would have to consider a range of measures to show toughness toward Pakistan. "The government is under pressure; we are taking steps," the official said. "We're not trying to say we're going to attack them. Short of that everything will have to be pursued."

"Certainly we are not going to sit back with Pakistan unleashing this terror on India," the official added.

The Indian government's options, officials and analysts said, include everything from suspending peace talks, which have gone on at a snail's pace for five years, to suspending diplomatic relations to striking camps across the border that New Delhi suspects of training terrorists.

Reuters quoted a senior police official as saying yesterday that the only gunman captured alive told the police he was a member of the Pakistan-based Lashkar-e-Taiba organization, blamed for numerous attacks in Kashmir, a disputed territory administered by India, and elsewhere.

The government has not allowed any outside access to the captive, who has identified himself as Ajmal Amir Qasab, a Pakistani citizen who was wounded in the leg and is getting medical treatment at a military hospital in southern Mumbai.

The officer also said Anti-Terror Squad investigators believed there were accomplices on the ground who might have pre-positioned weapons at the hotels, and that the names and telephone numbers of five Mumbai residents were found among the mobile phones and wallets of the attackers.

He also confirmed reports in the Indian news media that a recovered satellite phone used by the attackers had been used to call a number in Karachi, Pakistan throughout the assault.

At the same time, the officer also disputed assertions in the Indian media that all the attackers were Pakistani, saying they were of many nationalities, including a Malaysian.

With national elections less than six months away, Indian officials are aware of the need to shore up public confidence in the country's domestic security apparatus. Yesterday evening, Singh said his government would expand the National Security Guard, the elite antiterrorist unit that sent its Black Cat commandos to flush out the attackers from the two hotels and the Jewish center.

Singh also said discussions were underway to establish a federal agency of investigation to streamline the work of state and national agencies, and to fortify maritime and air security. The police have said the attackers came by boat. The Indian government had been warned as far back as March 2007 of infiltration by sea.

"Clearly, much more needs to be done," Singh said in a written statement, "and we are determined to take all necessary measures to overhaul the system."

In a telephone interview from the capital, the junior home minister, Shriprakash Jaiswal, said the government would double the size of the 7,400-strong National Security Guard.

The force was created after the 1984 siege of the Golden Temple in Amritsar by Sikh separatist militants. Nearly 500 civilians and more than 80 army personnel were killed in that standoff.

But questions have been raised about whether the guard could have begun its operations sooner and why it took its commandos so long to defeat the attackers.