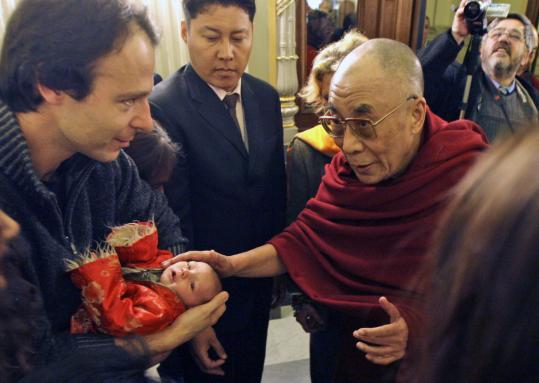 The Dalai Lama blessed a child yesterday upon his arrival in Prague for a meeting with former president Václav Havel. He also had plans to address the Tibet Group in the Czech Parliament. (Petr David Josek/ Associated Press)
By Christopher Bodeen Associated Press / November 30, 2008
Text size – +

BEIJING - Business ties with France will be likely to suffer if President Nicolas Sarkozy of France goes ahead with a planned meeting with the Dalai Lama this week, according to a leading scholar backed by the Chinese government.

Feng Zongping made the statement in an interview published yesterday in the official China Daily newspaper. It marked the latest display of China's determination to intimidate Sarkozy and scare other foreign heads of state away from holding meetings with Tibet's exiled Buddhist leader.

Sarkozy is scheduled to meet the Dalai Lama next Saturday during a visit to Gdansk, Poland.

Yesterday, Dalai Lama arrived in Prague, the capital of Czech Republic, for a meeting with former president Václav Havel. Tomorrow, he will address the Tibet Group in the Czech Parliament and give a public lecture on "Compassion: The Basis of Happiness."

Trade retaliation is one of the most potent weapons in China's arsenal, and China's decision to pull out of a summit with the European Union that was to have begun yesterday in France has already prompted hand-wringing among French business leaders.

More than 150 Chinese business executives had been expected to meet with European counterparts at an event on the summit's sidelines organized by the French employers' lobby Medef.

France has "underestimated China's resolution to protect its sovereignty," said Feng, who is the European studies director at the China Institutes of Contemporary International Relations. Feng's institute is associated closely with the Foreign Ministry.

French leaders want to "play the Tibet card and at the same time maintain good economic trade relations with China, which is very difficult to achieve," Feng said. "China doesn't want the West to think that 'OK, we will meet the Dalai Lama and business will go on as usual,"' he said.

China routinely objects strongly to meetings between foreign leaders and the Dalai Lama, who fled Tibet for India in 1959 amid an abortive uprising against Chinese rule. However, the summit's cancellation was a dramatic example of the lengths to which Beijing will go in its campaign to isolate the Dalai Lama internationally.

China's uncompromising attitude toward the Dalai Lama's calls for greater Tibetan autonomy has hardened further since deadly riots broke out in the Himalayan region in March. Those set off the biggest revolt against Chinese rule in decades, to which China responded by flooding Tibetan areas with heavily armed troops.

While Beijing sought to remain low key and avoid criticism ahead of the Olympics, authorities have since discarded any such restraint, recently vilifying the Dalai Lama and his followers as racist thugs intent on splitting China and returning feudal theocracy to Tibet.

China says Tibet has been part of its territory for 700 years, although many Tibetans say they were effectively independent for most of that time.

Beijing's anger appears to be stoked in part by the fact that the Dalai Lama remains deeply revered among Tibetans and well respected internationally for his commitment to freedom and nonviolence.

Beijing's latest protests have focused attention on pending Chinese orders for Airbus aircraft made by France, with the company forced to deny rumors of cancellations. China's top three airlines are state-owned, and aircraft orders are timed for maximum political effect.