Day of reckoning in India after siege ends 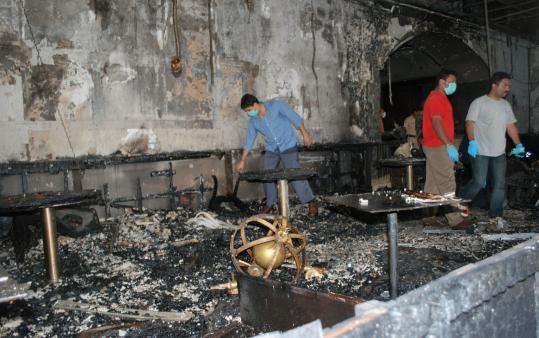 Men inspected a burned-out room of the Taj Mahal Palace and Tower hotel in Mumbai, India. Terrorists had broken in room by room and shot occupants at close range. Some were shot in the back. (Kyodo News via Associated Press)
By Somini Sengupta and Keith Bradsher New York Times / November 30, 2008
Text size – +

Bodies were extracted from the ruins of the Taj Mahal Palace and Tower hotel after the standoff with militants there ended yesterday in a gunfight and fire. At the main city hospital morgue, relatives came, clutching one another in grief, to identify their dead. By midafternoon, the morgue was running out of body bags.

Funerals went on throughout the day, with a toll of at least 195 dead and 295 wounded, according to an Associated Press tally. Among the dead were 18 foreigners, including six Americans.

As the reckoning began after the three-day terrorist siege here, questions arose about the apparent failure of Indian authorities to anticipate the attack or respond to it more swiftly.

And tensions were high between India and Pakistan, where officials insisted that their government had nothing to do with assisting the attackers and promised that they would act swiftly if any connection was found within their country.

Perhaps the most troubling question to emerge yesterday for the Indian authorities was how, if official estimates are accurate, 10 gunmen could have caused so much carnage and repelled Indian police officers, paramilitary forces, and soldiers for more than three days in three buildings.

As the investigation continued, it was unclear whether the attackers had collaborators already in the city or whether others in their group had escaped. All told, the gunmen struck 10 sites in bustling south Mumbai. Nine of the gunmen were killed and one was captured, officials said.

Amid the cleanup effort, the brutality of the gunmen became plain, as accounts from investigators and survivors portrayed destruction and indiscriminate killing wherever the terrorists went.

At a gas station near the Taj hotel, attackers opened fire on two waiting cars on Wednesday, critically injuring two occupants. When a married couple in their 70s went to their third-floor window to see what was happening, the terrorists blazed away with assault rifles, killing both and leaving shards of glass that still hung in the window yesterday.

Down the road, when the gunmen seized Nariman House, the headquarters of a Jewish religious organization, neighbors mistook the initial shots on Wednesday night for firecrackers to celebrate India's cricket victory over England.

But when drunken revelers in a nearby alley began throwing bottles and stones, two attackers stepped onto a balcony of Nariman House and opened fire on passersby, killing a 22-year-old call center worker who was the sole support of his widowed mother; five others were injured. A teenage male who stepped out onto his balcony and came within firing range was swiftly shot and killed, a witness said.

"We still don't know why they did this," said Rony Dass, who lives across the street from the gas station. He lost a lifelong friend, a tailor who was locking up his store for the night Wednesday when he was killed.

At the Oberoi hotel, the second luxury hotel to be assaulted, the gunmen called guests on hotel phones; some of those who picked up were then attacked in their rooms. At the Taj, terrorists broke in room by room and shot occupants at close range. Some were shot in the back.

"I think their intention was to kill as many people as possible and do as much physical damage as possible," said P.R.S. Oberoi, chairman of the Oberoi Group, which manages the adjacent Oberoi and Trident hotels, both of which were attacked.

Evidence unfolded that the gunmen killed their victims early on in the siege. At the Sir J.J. Hospital morgue, an official in charge of the postmortems but not authorized to speak to the media, said that of the 87 bodies he had examined, all but a handful had been killed Wednesday night and early Thursday.

Contrary to earlier reports, it appeared that Westerners were not the gunmen's main targets. They killed whomever they could.

Rattan Keswani, the president of Trident Hotels, said a range of nationalities was represented among the 22 hotel guests who died, in addition to the 10 staff members, all Indian.

The city's police chief, Hasan Gafoor, said the last of the nine gunmen killed fell off a terrace of the Taj hotel yesterday morning as the siege ended. A 10th suspected terrorist was arrested; the police say he is a 21-year-old Pakistani, Ajmal Amir Kasab.

The American victims included Rabbi Gavriel Noach Holtzberg, Rabbi Leibish Teitlebaum, and Bentzion Chroman. They were found dead at the Chabad-Lubavitch center, along with Holtzberg's Israeli wife, Rivkah. Gavriel Holtzberg and Chroman were dual US-Israeli citizens. Alan Scherr of Virginia and his daughter, Naomi, were killed at the Oberoi.

The sixth US victim was not identified.

President Bush yesterday pledged full US support for the investigation, saying the killers "will not have the final word."

Yesterday afternoon, busloads of elite commandos, fresh from the siege of the Taj hotel, sat outside the nearby Gateway of India and shook hands with elated spectators.

The siege may have been over, but new tensions within the region were on the rise.

In an attempt to defuse the situation yesterday, the Pakistani president, Asif Ali Zardari, told an Indian television channel that he supported a thorough investigation no matter where it leads.

"As president of Pakistan, if any evidence points to anyone in my country," Pakistan will take action, he said.